One of the most elegantly languid tunes to appear in my life of late has been "Paints" by Glasgow's  horrendously named Le Thug.  'Appear' because I didn't seek it out - it was on a free cd-r given to those who attended The Green Door Studio's 7th anniversary wingding at The Poetry Club last weekend.  If "Paints" is any guide, Le Thug aren't the pistol-toting, gold toothed gangsta rap crew their name would suggest but a gauzier, dronier version of the divine One Dove.  Clio Alexandra MacLellan has the most heavenly voice.  It carries the melody of the chorus like cherry blossom on a warm breeze.

From the looks of things, "Paints" used to be on the group's bandcamp page but isn't anymore so I can't share it here.  Hopefully, however, if this picture on Song By Toad Records' tumblr site is any guide, it'll be released on vinyl at some point soon (see track 4): Right now I'm regretting the fact that I wasn't aware of Le Thug sooner as they played The Old Hairdressers on December the 2nd.  It would've been great to swoon and sway to "Paints" particularly as I was on holiday that week.  A missed opportunity.  Fortunately, the Christmas holidays will afford the time to become familiar with the songs posted on Le Thug's Soundcloud page.  Here's hoping that there's something possessing even a tiny fraction of the finesse of "Paints".

Marva Holiday season, that is.  In October The Quietus ran former Boo Radleys fellow Martin Carr's Baker's Dozen.  One of his choices was Marva's irresistible mover"It's Written All Over My Face":


It's such a joyous piece of music with lots of little euphoric builds that sweep you along and before you know it your feet are moving and your hands are clapping.  It was originally released on GNP Crescendo of Hollywood, USA.  The only other records I have on that label are by Sky Saxon's keyboard riddled garage troupe The Seeds; you have to admire the breadth of some 60s labels!  Helpfully, a couple of years ago it was included on Kent Records' cd "The Cleethorpes Northern Soul Weekender 1993-2012 20 Soulful Celebrations".  The other Marva Holiday 7" to have found its way into my record box is a split with The Magicians as part of the aforementioned Kent's Select series. 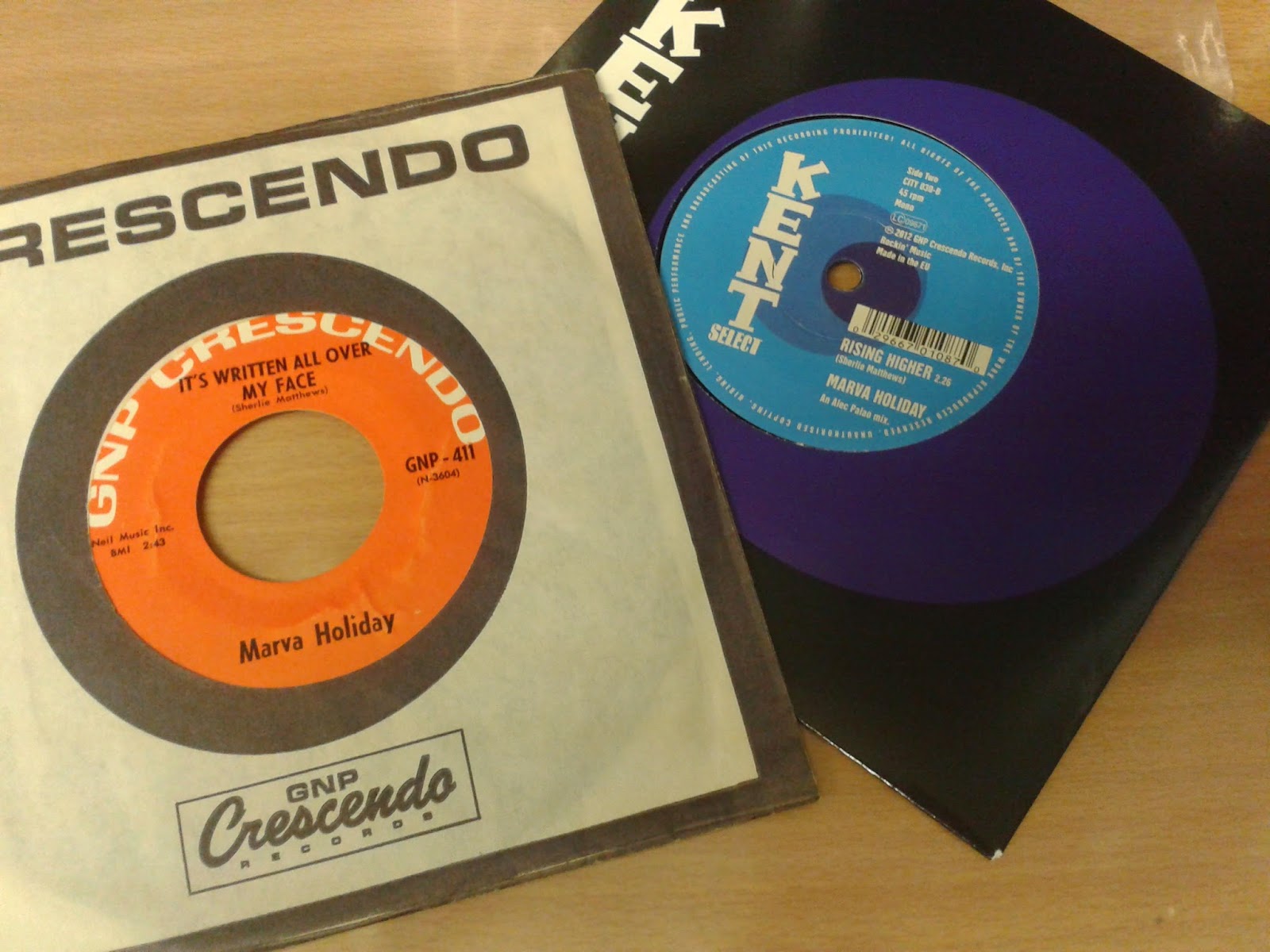 Like "It's Written All Over My Face", it was penned by the multi-talented Mirwood / Motown staffer Sherlie Matthews whose place in my heart was assured the instant I heard and flipped for The Belles' "Don't Pretend".  "Rising Higher" was included with a host of other treats on the "Kent 30: Best Of Kent Northern 1982-2012" cd.  The entire staff at Kent Records really should be getting recognised in the upcoming Queen's New Year Honours List shouldn't they?  Sir Ady Croasdell would look great on the 6Ts flyers!
Posted by brogues at 21:36 No comments:

Records of the year for Monorail Music (and a few more!)

Once again Monorail Music asked a bunch of their regular customers for their top 10 lps, their top 2 singles/tracks and their top 2 reissues.  As ever, reviewing the year's purchases was a whole heap of haphazard (my memory isn't what it used to be!) fun.

A combination of going out more than is healthy or, as I like to call it, supporting the vibrant local music scene (ha!) and buying more records than is decent or even manageable meant that there wasn't really a record that took residence on the Not Unloved turntable.  The mp3 version of Comet Gain's record, however, soundtracked many a splash through puddles on the way to and from whichever gig venue was hosting that night's entertainment.  Its bruised romanticism never failed to make me feel.  "Up At Lagrange" is such a pure record.  It's a neat, perfectly realised and beautifully sung collection of heartfelt songs that yielded my favourite lyric of the year:

A one hour commute by car and The Muffs' latest album on cd combined to make it my most listened to record of the year.  Kim Shattuck's full-throated scream was one of the most thrilling sounds of 2014 - prime Courtney Love would've struggled to outdo her.  Literature's pristine guitars served their softly sung melodies beautifully in a way that made me ache for the days when the Parasol Mailorder dropped onto the mat stuffed with little label American pop.  Likewise, The Luxembourg Signal sounded timeless but fresh and provided further evidence that Shelflife was having the year of its life.  It's certain that it would have been in higher in my list had I got it earlier, too. "Black Metal" found its way into my consciousness through its clever deployment of a Pastels sample but proved attractive on so many levels.  With each successive listen it earned a bigger place in my heart.  It wouldn't sound out of place in the Les Disques du Crepuscule catalogue.  Weed Hounds were a brilliant tip from the perennially searching Did Not Chart blog.  2 minutes and 30 seconds into the record's opener, "Harbor", I was scrambling, all fingers and thumbs, to login to my Paypal account.  Mary Timony and her Ex Hex bandmates made an irresistibly stomping lp that, along with the aforementioned Muffs record and The Vaselines' "V For Vaselines", proved that you don't need to be a teenager to make fizzing, melodic power pop/punk.  The memory of Mad Nanna's appearance at the much missed Volcanic Tongue shop still makes me smile.  I worried that when Golden Lab released the straight-to-TDK document of that night on vinyl, it might tarnish the memory.  I needn't have worried!  The Bug had the good sense to collaborate with Liz Harris and Warrior Queen.  In truth, I enjoyed Andy Stott's "Faith In Strangers" - especially the sparse, sublime "Violence" - just as much but I could only pick 10 records.

"I'll Call Your Bluff" sidesteps accusations of being simply an nth generation retread by having the catchiest guitar line this side of 60s Carnaby Street and an emotional directness that feels entirely honest.

Maybe the 7" I played most this calendar year was Milk'n'Cookies kinda wrong/totally great slice of weedy-voiced, Big Star-esque glam pop.  I sang it in the kitchen at work when nobody was listening.  I sang it when I walked home from gigs in the rain.  I sang it at the top of my lungs on many a seemingly endless commute.  By now, a lot of people are scunnered with Record Store Day but this year's will live long in my memory thanks to that 45 and its ludicrously lascivious refrain: "Ten girls, twenty girls, I want more! Forty girls, fifty girls just because there's not enough girls in the world".

Monorail Music's full top 50 list (along with my photo of the Aphex Twin blimp above Mono/Monorail Music - *beam*) can be pored over on their facebook page.
Posted by brogues at 23:26 2 comments:

2014 has been a dazzling year for live music in Glasgow.  A lot of the truly outstanding sets I've witnessed have been by Glasgow-based artists such as party band extraordinaire Golden Teacher, their jazzier chums Whilst (their set supporting ESG at Broadcast was like being run over by a monster truck) and Richard Youngs.  Three acts, however, have tempted me from my couch more often than any others.  If I could have bought a season ticket to their shows, I would have.  They are about as far removed from the legion of plodding, guitar-wielding dullards as is possible and they are:

In the first half of 2014 Claudia Nova's (previously of the brilliant Aggi Doom) Hausfrau played a succession of icily atmospheric shows that peaked with an untouchable performance to just a few initiates at Roxy 171 on Great Western Road (the YouTube clip above was filmed that night).  Against sparse backing, Claudia sang the bulk of what would become her first record.  That night's rendition of the title track, 'Night Tides', was one of the unquestionable highlights in a year of phenomenal live music.  Hausfrau's debut cd came out on French label Unknown Pleasures to little fanfare on the day that Scotland voted No to independence from the rest of the United Kingdom; there wasn't even a launch show or party for it which was a real shame.  Glaswegians can buy 'Night Tides' from the upstanding citizens at Monorail Music.

Hausfrau will be appearing at The Poetry Club on the 20th of December as part of The Green Door Studio's 7th birthday celebrations.

Over the past few months it has been thrilling to watch Night School Records boss Michael Kasparis as Apostille ratcheting up the level of his performances to an almost insane level over a succession of increasingly incredible gigs.  Few can match Apostille for sheer commitment and physicality.  Few would even try!  One particularly exhilarating performance in support of Alex Neilson's Death Shanties at The Old Hairdressers saw Kasparis starting seated, determined to do something different, but by the end he was climbing over the wooden chairs screaming in the faces of the faithful.  It was nothing short of breathtaking.  Live, songs like 'Wrong', above, take on a heft and a momentum that impels you to move.  Dark electronic music has seldom sounded less po-faced and more danceable.

Apostille appears at Audio on the 19th December as part of the Status Choke / Broadcast Beach Christmas bash.  Don't miss it!

The name Pennycress (originally just Cress) started appearing at the bottom of bills in the summer.  From their first show in Glasgow School of Art's Vic Bar it was clear, however, that they had both ferocity and texture in equal measure.  Since then they've blasted their way through a number of show-stealing sets to the point where they really should be the main draw.  Theirs is a tight, cohesive take on Olympia, Washington riot grrrl/hardcore.  Fired-up teenagers the world over should be tearing down whatever posters they have on their walls to make way for their Pennycress clippings.  Fingers crossed they can capture their spark when recording.  If they can, their records will be  uncompromising treats.