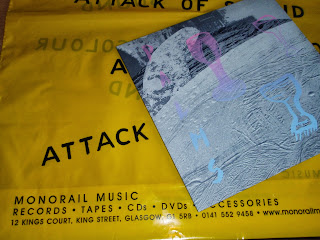 Palms have long been one of my favourite Glasgow groups. Whenever they play, I try to be there as their PJ Harvey by way of Babes In Toyland brand of creeping ferocity is always exhilarating, always welcome. Until now, their recorded output has been modest: a split cassette with Aggi Doom and some wonderful tracks on the lush Some Songs Side-By-Side box. Thankfully, the astute Watts of Goodwill Records and RE:PEATER Records - both of whom do sterling work in documenting Glasgow's current vibrant music scene - just added to that slim list by releasing their debut 7”, “Wolf”. As expected, it’s another catchy but ominous smash.  It’s not quite as wild as, say, “Blood” from the box but it still has considerable bite.  There's an unmixed demo of it here. "Ghosts I've Known" on the flip is a menacing creeper (there's a live version here) with a great rusty guitar sound that churns you up inside.  Fabulous!

At present, I don't believe"Wolf" has distribution so your options for getting a copy are:

1. In person from Monorail Records in Glasgow
2. In person or via mailorder from Rough Trade (London)
3. Direct from Watts of Goodwill (6 pounds post paid in the UK)

The recent launch gig at Mono for "Wolf" was a tremendous affair.  The sound was clear and trebly and the group played with a triumphant glint in their eyes.  It was on a Friday night and it felt like everyone was in a good mood and willing Palms to do well so it was so great that they did.  It was a timely reminder that Sinead is a wonderfully versatile singer who can go from sweet to snarling in an instant.  It was a reminder, too, that their outrageously good drummer, Julia, has the most animated, charismatic hairdo in the whole of Glasgow!
Posted by brogues at 13:02