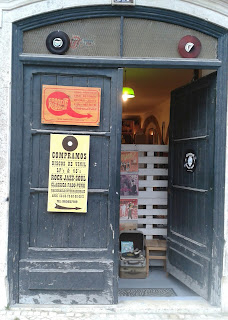 (apologies for the wonky photo...seems I lost my balance on the cobbled street)

Even in 2016 when record shops are thinner on the ground than they've ever been, it's hard not to judge a city by the quality of its record shops.  It's just as well for Lisbon, therefore, that it has Groovie Records; if there are any other great shops, I didn't find them.  It occupies a small space near the fab Time Out Mercado but has a commendably high density of top garage punk lps and 45s.  Of course Groovie's own output was prominently displayed including the hot new lp from Russian 60s stylists The Karovas Milkshake whose "Cryptique" has to be the best Jacques Dutronc homage/facsimillie since the great man's heyday:

As well as bagging a few of Groovie's lps (very reasonably priced they were, too!) I took the opportunity to pick up some thumping Get Hip singles including this hyper-ventilating monster from 1988 which was surely recorded at the bottom of a reverb-enhanced garbage can:

All in all a solid Not Unloved thumbs up for Groovie!
Posted by brogues at 12:07