Maybe surprisingly, a 2-piece, all-guitar version of Melbourne, Australia's Mad Nanna showed up last week in Glasgow.  Their tipsy juice-enhanced after hours show in the Volcanic Tongue shop was something strangely special that will live long in the memory.  Mad Nanna make endearingly ramshackle records in what sounds like a dusty 70s mid-western American basement.  What they produce is, on first listen, rudimentary but somehow manages to be much more compelling than that might suggest so stands up well to repeated listens.  "I Wanna See You", their latest single for Soft Abuse Records, is a case in point.  The bulk of the slightly gruffly sung lyrics are just the song's title repeated and the guitar repeats a simple surging figure over and over with few variations.   The drums, too, are delightfully clattery but elementary.  As a whole, though, it's totally cohesive and inexplicably addictive like a lot of the more esoteric records I've heard on, say, Gulcher or Columbus Discount.  An essential purchase!

Also, out of Melbourne and with an equally compelling new single are Mole House.  As with Mad Nanna, they don't think it necessary to over-complicate their music preferring instead to leave space for feeling in their grooves.  "Come Around" features one of the best lazily unwinding guitar solos to charm these ears in a while.  It's great music to listen to when your eyelids are heavy and you just want to sing along with something soulful whose notes you can conceivably hit.  There's simple joy to be had in the act of waywardly singing such a stoned, dreamy tune.

As a born evangelist (ok, music bore), I totally embraced the self-compiled tape as a means for spreading the good word about whichever groups I was keen on for most of the 90s.  I really did churn them out!  I received some absolute belters, too.  Lots of those I received through the indiepoplist's (R.I.P) monthly tape swap were incredible.  Having said that, I seldom bought pre-recorded tapes - they never had the allure of vinyl or the convenience of cds - so for me tapes are almost entirely associated with active construction.  I'm sure that's a large part of the reason why I loved Good Press gallery's "The History Of" exhibition/installation so much.  Timed nicely to coincide with the recent Cassette Store Day*, it's a hands-on installation.  You can read about and listen to a selection of tapes "compiled and created by a selection of artists, musicians, record labels and other practitioners who have an invested interest in music" on deliciously antiquated tape recorders and then, if it takes your fancy, pay 2 quid per tape and duplicate you own copy of those which piqued your interest on a high-speed duplicating machine.  You get to fold the little (pre-scored - great attention to detail!) inlay cards, too.  I chose to duplicate cassettes compiled by Monorail's Dep Downie (a history of Mike Watt in 20 bands/projects), illustrator/lecturer/publisher Marc Baines (a history of the fabulous Vesuvius Records which he co-ran in the 90s and which, in its time, produced some beautifully packaged cassettes) and Portland, Oregon's excellent M'Lady's Records.  "The History Of" runs until October 6th and if you ever excitedly made a mixtape to change a friend's life, you'll love it. Who knows, you might find yourself rushing home, retrieving those dusty shoeboxes full of tapes from the loft and looking back fondly on your own history of making tapes.  Well done to the Good Press team for such a brilliantly conceived and wonderfully executed installation. 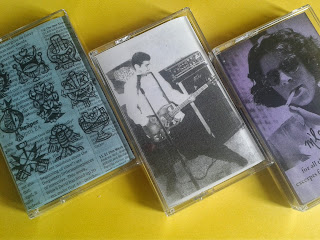 * Sure some folks scoffed about CSD but I had a great time at Monorail listening to Cheer's gentle guitar atmospherics with good friends and buying "Summer Rain" by The Pastels and a tape of album demos on Suplex Cassettes by The Proper Ornaments.
Posted by brogues at 10:54 No comments:

A Scene In Between 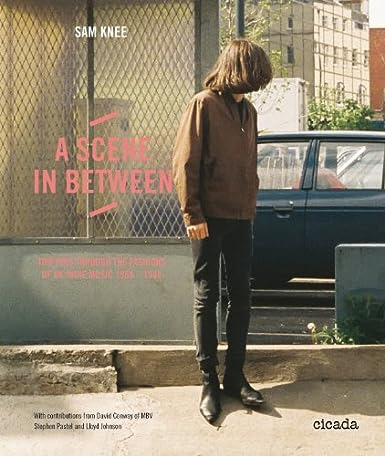 Ever since since Sam Knee of the excellent Leaders of Men blog put out the call for contributions to a proposed photo book on the fashions of the 80s independent pop groups, I've been keen to see if it actually came to fruition and, if so, just what unseen images he was able to turn up.  Excitingly, A Scene In Between has become a reality and will be published via Cicada Books next month (October 2013).  Thrillingly, it has turned out wonderfully.  Mind you, the signs were good.  First, a couple of pictures of Sarah Records' The Sea Urchins looking precocious but stylish surfaced on the blog.  They were an unexpected delight and confirmed that the book wouldn't just focus on the big groups of era such as The Smiths or Orange Juice but would also devote space to some of the less well known but no less brilliant acts.  Then amazon.co.uk uploaded the fantastic cover image, above.  The skinny guy in drainpipes and needle-toed boots (who I now know to be Robert Hampson of Loop) could have crawled, blinking under his enviably thick mop from the Pebbles Trash Box and was the very epitome of 60s punk cool.  Having now seen a finished copy in PDF form, those old feelings of historical jealousy that I've written about before have resurfaced.  How I would love to have been precocious enough, hip enough and had money enough (I certainly didn't have any of that in the 80s!) to have been going to gigs and buying records and fanzines in that period. The classic pictures of The Pastels, The Clouds, Meat Whiplash (!), Primal Scream, The Vaselines etc. simply hammer home the point that something great was going on just 25 miles up the road while I was still kicking a football around at the local estate of an evening.  There are so many great pictures to pore over.  A big favourite is the shot of Southend-on-Sea indie scenester Velda Pond in her room looking every inch the beehived, prospective 60s pop starlet as Johnny Rotten stares out from her wall.  Another is the endearing one of Felt's Philip King clad in a thick-striped top writing thoughtfully on a notepad while a teddy bear - also, sweetly, in stripes - looks off into the distance, seemingly pondering the words being penned.  As a Pastels obsessive, the photos from Stephen Pastel's archive are manna from heaven, particularly the live image of the group with Jill and Rose from Strawberry Switchblade on backing vocals.  Dave Conway's early My Bloody Valentine pictures showcase a group whose haircuts could give The Gruesomes a run for their money (see, too, The Wylde Things).  Conway, along with Stephen Pastel, Amelia Fletcher and outfitter Lloyd Johnson are interviewed.  I'm saving these for when I have the physical book in my hands.  They're bound to give even more colour to the period.  I know I'm biased as I fit squarely into this book's target market but if the thought of a book that, as Sam Knee puts it in his intro, "sets out to excavate the sartorial treasures of this UK indie youth scenery spanning; Postcard via Whaam! and Creation records, C86, garage punk, shoegaze and the multifarious micro sub-scenes that sprouted in between" raises your pulse even a tiny amount, then A Scene In Between must be considered  a mandatory purchase.  Sensibly, it'll be retailing at the modest 15 pound mark and there's talk of a launch shindig at Mono some time in October.  I really hope it happens as I'd love to congratulate Sam Knee in person for having the vision, drive and above all the love for his subject to turn a great idea into a beautiful artefact.  Let's hope now that the Sarah Records book and documentary and the Sound of Young Scotland documentary currently in the works turn out so well.
Posted by brogues at 13:03 2 comments: