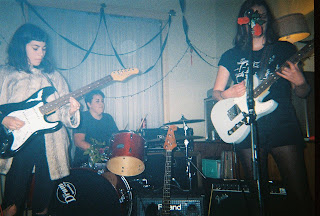 "Sunshine Grooves" (You Are The Cosmos Records) came out last summer and takes the superior sunshine pop of the 1960s (The Beach Boys, The Yellow Balloon, Jan & Dean etc.) as its starting point and adds a generous dusting of icing sugar, a heaped teaspoonful of Creamola Foam and a handful of Rainbow Dust with predictably tooth-bothering results. Not Unloved, of course, has always craved the sweet stuff so fully endorses Mikah's recipe for making the world a brighter, gentler place. Whichever register (helium or counter-helium) he's singing in, Mikah's voice is a thing of wonder. Sometimes wholesome pop is the best pop!

Emilia Sisco and Cold Diamond & Mink "Don't Believe You Like That"

In 2019 it's not news that the presence of the words 'Timmion Records' on a record's label are as close to a guarantee of quality as the record industry can manage and, thankfully, their most recent 7" does nothing to dispel that. Emilia Sisco teams up with Timmion's regular backing group, Cold Diamond & Mink, for a haunting (check the ghostly waft of the backing vocals!) but sweet number that is so addictive in a dead of night Amy Winehouse way that Not Unloved is seriously contemplating the purchase of another copy for when our first copy wears through.

3 songs on repeat chez Not Unloved

"Cheer Up, Charley. You ain't always been as big a mess".

So starts the first track on The Delines' latest lp, "The Imperial" (Decor). It sure sets the tone for a terrific album of sombre vignettes of lives/relationships gone a bit wrong somewhere along the way. The arrangements, the playing, the production and, above all, the wearied singing is just beautiful. Luckily, they're playing Glasgow tonight. I'll be the one blinking back the tears during "Cheer Up, Charley".

The good folks behind the Janglepophub Twitter account have teamed up with pals and started a label called Subjangle. Their first release, "Best Laid Plans", comes from Portsmouth's Lost Ships who, as befits a group on a label with 'jangle' in its name, know their way around a memorable jangling guitar line:

There's something of The Lucksmiths in Lost Ships' overall sound but they're that bit more strident. It's good stuff.

Reading the single reviews in the latest issue of Shindig! magazine (Billy Childish cover), I learned that The Spookies had sneaked out a second 7" (on Spain's Bickerton Records) while my back was turned. Scottish garage maven Lenny Helsing gave it the kind of review that must have had the be-fringed Nuggets/Pebbles lovers scrambling, all fingers and thumbs to the Bickerton bandcamp page.


"Please Come Back" positively glows with vitality. It's a euphoric listen that is up there with the recent lp by The Embrooks in terms of purpose, energy and the sheer quality of songwriting and hooks. Good times in the garage, that's for sure!
Posted by brogues at 16:33 No comments:

Lucy and The Rats "Melody"

Lucy - of Australian Ramones-lovers The Spazzys - teamed up with a bunch of delinquent leather boys, The Rats, to produce an endearingly wide-eyed summertime pop classic that's liberally dosed with hand-claps and the kinda pure-voiced singing that never fails to lift the spirits:

I wish I'd heard it on its release in spring 2018 when the weather in Glasgow was untypically hot as it would've made the ideal soundtrack. Thumbs-up to The Next Big Thing for ensuring that Lucy and The Rats didn't pass me by completely.
Posted by brogues at 14:48 No comments:

Email ThisBlogThis!Share to TwitterShare to FacebookShare to Pinterest
Labels: Lucy and The Rats, Music

Mary Anne Hobbs just finished her 6Music show with Public Enemy into Public Image Ltd. Unfortunately, Shaun Keaveny didn't pick up the baton and start his with Glasgow's Public Service. Talk about a missed opportunity to give yr audience a jolt! "I'm Gonna Kill That Man" is the first 45 by Public Service and inaugurates Glasgow's newest, fiercest label, Anxious Music:

Public Service are a fearsome prospect live; all screams, marauding and lacerating guitars. It's hard to capture that level of ferocity in a studio but this 7" makes good on their live promise and certainly pulls no punches. If you dug Not Unloved's recent Current Affairs 7", you're gonna need this 45 immediately. Glasgow sure is coming up with the goods right now!

Yet more reasons to love Australia

January ain't so bad. Why, just this week we've had the announcements that:

a) "Whoosh!", the debut full length lp by The Stroppies, is due on Tough Love in March. If "Cellophane Car", below, is any guide, it'll be a bubblegum (those keyboards!) treat:

b) French label Future Folkore Records is set to release "Hip Blister", a split 12" on which the ever effervescent Parsnip duke it out with the reliably twisted The Shifters for the title of most adorable Australian band of February, 2019:

c) February also sees the digital release of the latest 4 tracker from the splendidly spiky Display Homes. They may not be as cuddly as the bands above but "Block" comes on like a chunkier Vital Idles with an angry Fay Fife on vocals which is a fine, fine thing to hear:

As if all of the above weren't treats enough, Not Unloved's postman just dropped-off Normie Rowe's lip-curling, slicked- back hair combing cover of Johnny Kidd and The Pirates' "Shakin' All Over". From September '65, it's just so cool (don't be fooled by the square 'do in the pic, below!). Definitive:

Thanks Australia. You're the best!
Posted by brogues at 21:55 3 comments:

Around Black Friday last year (2018 - yikes!) I saw a bunch of Stateside folks posting the cover art of an lp featuring The Dream Syndicate, The Bangles, Rain Parade and The Three O'Clock covering each other's songs. Hopefully, it'll show up at some point in UK-based record shops (there's no way I'm handing over next month's pay cheque to the US Postal Service to get a double lp sent across the Atlantic) as the concept behind it is sound. Reading the name The Three O'Clock again gave me the wee jolt I needed to finally pick up a copy of the sole 7" by that group''s precursor, The Salvation Army. "Mind Gardens" (New Alliance, 1981) zips along at skatepunk speed while Michael Quercio, masquerading as Ricky Start, sings in a cute, interestingly-accented manner (the way he sings is 'goes' and 'grows' is so endearing!). I love it for all the same reasons I love early Redd Kross or that first lp by The Descendents.

The surprisingly poignant b-side is equally great and possibly even more sing-along-able: