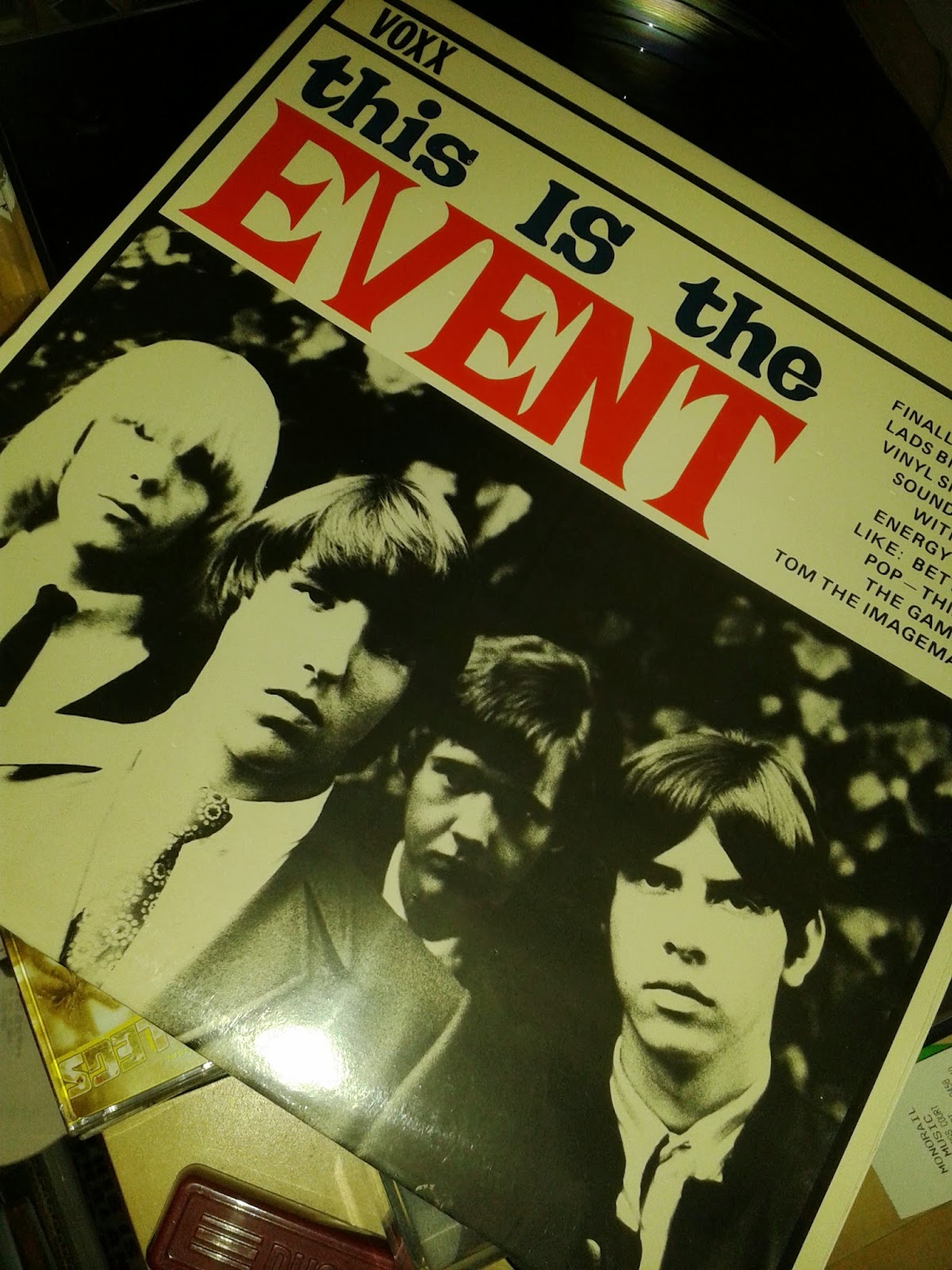 Had I been home when the postman arrived today I would have struggled not to give him a hug as the parcel he had in his bag for me contained the lp on which this giddy-making slice of British Invasion revival (it's from 1989 not 1965) POP appears:


Now, that's how to open an album!  I think it's safe to say that the singer has heard Alex Chilton.  If you'd asked me a fortnight ago if I'd ever heard The Event before YouTube's algorithm kindly suggested I give them a whirl, I would have told you unequivocally that I hadn't.   I would, of course, have been entirely wrong as a good friend had included them on a compilation for me a few years back.  I must have been so snowblind from the avalanche of other great pop songs on that disc to notice it at the time.  On first listen "Pop Think In" was only one of a number of tracks on "This Is The Event" to set the pulse racing. "She's Our Girl", in particular, is pop art POP at its best:

Getting to grips with "This Is The Event" (Voxx) over the next few weeks is going to be a blast.
Posted by brogues at 23:16 No comments:

Next Sunday the Monorail Film Club is presenting a special screening of Lucy Dawkins' "My Secret World: The Story of Sarah Records" at the Glasgow Film Theatre.  Following the screening I (!) will be chairing a Q&A with Clare Wadd who co-ran Sarah Records with Matt Haynes.  I've written before of my love for Sarah Records, so it's a great honour to be asked to do it.  Last May, I was lucky enough to be able to attend the Sarah Records themed weekender at Bristol's Arnolfini Centre at which the film was premiered.  It was a blissful weekend from the film itself, to the exhibition of Sarah Records memorabilia, to the walking tour of Bristol ("Look!...there's There And Back Again Lane!") to the live performances from The Orchids, Secret Shine, The Catenary Wires (Amelia from Heavenly's new group - debut single out NOW on Elefant of Madrid) and the living breathing art exhibit, Julian Henry.  It really was, to quote The Sweetest Ache, a heaven scented world for a couple of days.


What a majestic record! Unbelievably, only a b-side, too.  Incredible.

There's a Facebook event page here.  Here's what I wrote for it:

I was ripe for Clare Wadd and Matt Haynes’s Sarah Records. At the turn of the 90s I was a pretty timid teenager looking for things to help sand-off the rough edges of life. When Sarah released one heart-meltingly beautiful single after another by the likes of The Sea Urchins, The Field Mice, The Orchids, The Wake etc., I was in. Sarah stood out because it proudly celebrated beauty and unashamedly celebrated sensitivity; things which irritated the more laddish element writing for the rock press at the time. They got some savage reviews and were dismissed as “limp-wristed wimp pop”. Professing to a love of Sarah Records was more often than not met with a disparaging sneer. It only made me love them more. Sarah was about more than just music, too. I looked forward to reading Matt and Clare’s writing on the record inserts, fanzines and newsletters almost as much as I did to hearing their new releases; it was so passionate, erudite and slyly funny. Sarah didn’t shy away from the political - check The Wake’s “Major John” and wasn’t ‘Fuck the poll tax!’ etched into the run-out groove on the a-side The Orchids’ “Underneath The Window, Underneath The Sink”? - and it was inclusive: female, male, gay, straight, all were welcomed by Matt and Clare. Like Postcard before it, Sarah produced some wonderful ephemera. There were 5” flexidiscs, the aforementioned newsletters, gorgeous cut and paste fanzines, balloons, the butterfly design Heavenly carrier bag which, inexplicably, got up the noses of the more dunderheaded heavy metal tee wearing types on my university course and so much more. The records consistently looked fabulous, too. When Matt and Clare called it a day in 1995, I was genuinely a bit heartbroken. Happily, however, time has been kind to their uncompromising vision and impeccable taste, what with Lucy’s documentary and a soon to be published book. Even former foe the NME recently proclaimed Sarah to be second best indie label ever. Something which rivals Canadian punks Fucked Up covering Another Sunny Day’s rollicking “Anorak City” in terms of sheer unexpectedness.

Lucy tweets about the film at: @SarahRecordsDoc
Posted by brogues at 18:50 No comments:

Yesterday's Record Store Day at Monorail Music was a blast.  As ever, I bought a load of Record Story Day exclusives that I undoubtedly would have bought on any other day of the year: The Liminanas 7", the Hinds/The Parrots split 7", the third archival Half Japanese box, the new Sharon Jones and The Dap Kings 7", Night School's Rose McDowall reissue 12" etc..  I also bought the NF Porter reissue "Keep On Keeping On" / "I Can Only Be Sure" despite its 12.99 asking price because a) the SONGS and b) I'm no Daddy Warbucks so affording the originals is the stuff of delusional daydreams for me.  The record I had been looking forward to picking up most, however, was The Wake's subtly shimmying "Clouds Disco" 7".  It was a highlight of the cd version of last year's "Testament" compilation but belongs on 7" vinyl.  Caesar's vocals are so gentle and great and those keyboards sway as organically as seaside grass.  It's a sweet reminder that The Wake's melodies, heart and uncluttered arrangements are always welcome.
Posted by brogues at 13:04 No comments: