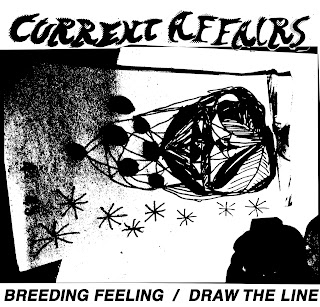 Has it really been 2 years since Not Unloved Records released 'My Sentiments' by Vital Idles? Unbelievably, yes. It's high time, therefore, for a second release:

NUSONIC002 has been in the works for a while now so it's no secret that it's by Glasgow's mighty Current Affairs. Current Affairs sprang from the ashes of the wonderful Seconds (Soft Power Records) in summer 2016, playing their first show at Jim Lambie's Poetry Club when Night's School's CC Dust memorably swept through Glasgow. That first gig was a real blast. Since then they've developed into one of the most powerful live groups around. January 2017 saw the release of 'Object' (Comidillo Tapes) which showcased a group with a deep affection for the darker sounds from the turn of the 80s (think Magazine/The Cure/Siouxsie) but with the skill to take that music somewhere new. 'Breeding Feeling' will be the group's vinyl debut and will be released in the next few weeks. Keep an eye on the Not Unloved bandcamp page!

Listen to samples of both songs here:

25 years ago, during the white heat of the lo-fi era,  I would've despised this: a polished, major label-sounding 80s rendition of the cherished Evie Sands (and many others) stormer. Now, however, it sounds vital and the studio sheen isn't off-putting in the slightest. I guess that's as a result of buying a bunch of power pop reissues in the intervening years. The singer has a fine voice and, really, the only thing I would change is to tone down the Beach Boys-y falsetto backing vox just a touch. Unplayed copies are really cheap so what ya waitin' on, punk?

The smallest things can elevate a record. In the case of The Torquays' 'Harmonica Man (From London Town)', for me, it's the line "He's a lovely lad" sung in a raspy American accent and the glorious jangling guitar that blooms 12 seconds in. I'll take that one moment over the entire careers of most groups. Details are important, I guess.
Posted by brogues at 15:26 No comments:

Michael O (Olivares of pop heroes The Mantles) recently released a fine new 7" on the dependably ace Fruits & Flowers. The second song on the A-side is 'Haunted'; a shy-voiced delight with a pleasingly hesitant lead guitar which spirals upwards in a flurry of Paisley patterned petals. Shame I didn't post this on Hallowe'en, eh?


Before Wednesday this week I hadn't heard of Oakland, California's Art Sick. By Thursday morning I was obsessed with their adorable brand of Chickfactor-friendly guitar pop and was cheerfully breaking my hard and fast (yeah, right!) no vinyl from the US rule for fear that to dither might mean missing out on securing one of only 100 copies pressed of their debut 7".  As with the Michael O single, the song that I've played the most (on bandcamp, the vinyl hasn't arrived yet) isn't the lead track, 'Going Down', which I do love (sweet vocals, handclaps and a Tiger Trap-style rumble - *swoon*) but 'No Clue'. It's a real heart-stealer that would've made a lovely addition to the magical Four Letter Words discography. Get on it!

Speaking of songs with handclaps, a recent soul purchase has them in spades. Jan Bradley's 'Back In Circulation' has led to a serious amount of kitchen dancing of late (sorry downstairs neighbours!). Sure it's heavily indebted to The Supremes, but Jan's voice is so charming and the rhythm so perfect that it's nigh on impossible not to move when it plays. Now, when's the next soul night in Glasgow?


The Knit Separates were active in the years 1996-2001. They existed entirely without my knowledge which is a shame as they were peculiarly wonderful. Thankfully, for us latecomers there's a new cassette retrospective on Brave Mysteries Recording Co.. There's nothing I can write about The Knit Separates' music that would be more insightful than the wee paragraph on the 'Dream No Evil' release page. It's ideal music for listening to on dusk-time walks round Glasgow University's deserted cloisters.