Diana Meehan from Los Angeles's rather lovely Sweater Girls is making a rare live appearance in Glasgow this Sunday at an intriguing looking NADFly organised event.  In late 2010 Sweater Girls released "Pretty When You Smile", one of my favourite singles of recent years which came wrapped in one of the very best sleeves I will ever see:

It's the kind of sleeve that makes a chap mourn the passing of his Tae Won Yu designed K Records punk boy t-shirt which was illustrated in a similarly adorable style.  Anyways, that's not important.  What is important is that Glasgow turns up in numbers to welcome Diana. If we're lucky, she may even bust out a version of Sweater Girls' take on The Modern Lovers' "I'm A Little Dinosaur". Full details:
Nadfly presents: Nicola Atkinson Does Fly, Diana Meehan, Emma Peebles, Lee Ivett and special guests
01/04/12 @ 20:00
£3
Nicola Atkinson Does Fly, Diana Meehan (Sweater Girls), Emma Peebles (Viridian Quartet), Lee Ivett (Baxendale) and more very wonderful guests
Posted by brogues at 10:46 1 comment:

It's an afflication: I can't get me no satisfaction. I guess it's the lot of all music obsessives to be continually dissatisfied with the contents of their record boxes and eyeing up the next must-have record.  For example, no sooner had I developed a crush on The Twerps and snapped up their debut lp than a Person of Sound Taste (tm) had recommended Dick Diver and I was left dissatisfied and wanting again.  Of the Dick Diver songs I've listened to so far, "Head Back" is the best.  Alistair McKay's (?) just-woke-up vocals are just tremendous - somewhat redolent of Stephen Pastel circa 1983 - and suit the recumbent The Go-betweens/The Modern Lovers feel of the music to a tee.   All McKay's lazy exhortations to his band members such as"Tell 'em Al", "No, you tell 'em, Rupe" and so on are pure Jonathan Richman (see the "Alright Leroy, tell them" 1min and 16secs into this little masterpiece for a particularly fine example!) and only make me love the song all the more.  Y'know, I'm not going to listen to any more Dick Diver songs online so that I don't spoil my appetite for the record or cd when I do finally buy it.

A similar thing happened a few weeks ago with vintage Korean music. There I was resting on my laurels feeling all chuffed (ok, smug!) with my recently acquired Kim Jung Mi cd- my first foray into the Korean music of the past - when a friend sent me this majestic slice of shimmy pop by Lee Jung Hwa and I was left  counting my pennies to see if I could afford it, too*:
It's like Arthur Russell in his sublime"First Thought, Best Thought" period hooked up with Dionne Warwick to make elegant, swaying supper club soul music live in The Kitchen.  Unbelievably good!
* - It appears on this Light In The Attic cd.
Posted by brogues at 23:15 No comments:

Who Are You, Polly Maggoo? 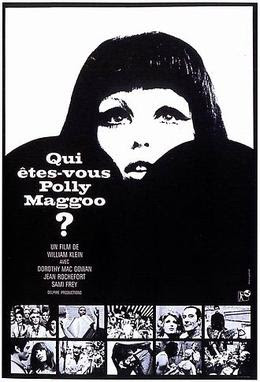 "After nearly a decade as American Vogue’s most subversive fashion photographer, William Klein made this trippy satire, a scathing and outlandish laugh at 60s fashionista France. It centres on buck-toothed American beauty Polly, who comes to Paris to model and winds up the subject of a vapid TV documentary and attracting the romantic attentions of both a TV exec and the Prince of Borodine. A surreal, decadent deconstruction of the glamour scene, it comes impeccably dressed in gorgeous high contrast black-and-white.


Selected and introduced by Marie Galipienso, a friend of the Monorail Film Club"
Posted by brogues at 15:19 No comments:

Due to the need for financial prudence, if I'd had a cartoon thought bubble above my head last Saturday afternoon as I walked to Monorail it would've read: "Right. Just get the Terry Malts record and, maybe the new Grimes cd but nothing more. Absolutely nothing more".  Then I heard this tremendously crunchy slice of co-ed garage scuzz :

Irresistible harmonica!  It's the lead track on a new Big Beat e.p. of tracks from the vaults of Southern California's Downey label.  It's a strong e.p. but unquestionably it's Bud & Kathy who provide the main feature. "Hang It Out To Dry" also appears on this Big Beat cd which is guaranteed to contain a smash or two.
Posted by brogues at 14:17 No comments:

One old, one new

Lately, there's been a distinctly classic pop flavour to the sounds emanating from Not Unloved's speakers  This is largely due to finally (it only took 13 years!) picking up Wall of Orchids' fabulous "Great Blue" cd e.p. (The Bus Stop Label) and the arrival of  The See See 's latest single, "Gold and Honey".  Across 5 superior quality songs Lane Steinberg and his fellow wallflowers demonstrate an ability to craft the kind of melodies that can part even the blackest of clouds and as if to prove the point, 2 minutes and 7 seconds into "No One's Looking At The Rain" the strings arrive like a kind of audio sun to dry up any lingering puddles.  It's a great moment which I look forward to each time it plays.
"Gold and Honey" may be much newer - it dates from the last month or so - but it, too, knows its pop history.  It's a serious-minded but thankfully never po-faced amalgam of sun-bleached mid-60s California vocals and non-wimpy, first generation Mod jangle.  Recent releases on The Great Pop Supplement label have been of a remarkably high standard and "Gold and Honey" certainly doesn't buck the trend.
(I'm guessing that it's this Paul Kelly who directed the video!)
Posted by brogues at 00:16 No comments:

Orange Disaster "Something's Got To Give"

When, in my omniscience, I drafted my Incontrovertible Rules of Pop as a mildly more agitated than normal young man (I don't think I was ever 'angry'), one of them was No Saxophones.  Over the years that was refined to No Solo Saxophones when I realised that the original wording would preclude great swathes of Northern Soul and...er...the odd record by The Pastels.  Of course, there was no way I could stick to even the amended rule.  For example, Ralph Carney's visceral blowing on Galaxie 500's "Blue Thunder" was amazing therefore had to be allowed so a permitted category of Soulful Saxophone was created.  I'd used that trick before to allow the odd guitar solo that violates my strict No Guitar Solos rule; Galaxie's Dean Wareham being the prime purveyor of the Soulful Solo.  Given this irrational hatred of the solo saxophone, it's quite odd that a significant chunk of the last few nights has been spent listening to Orange Disaster's "Something's Got To Give" with its prominent (though, certainly not honking) sax.  It's a wondrously moody number with a winning late night sway and two lovely voices by a group who, according to the information beneath the YouTube clip, were one of the precursors of The Perfect Disaster; a group whose records I've been seeing and ignoring - I assumed they were goths - in second hand shops for a couple of decades.  It might be time for a wander down that particular avenue, I reckon.

A quick internet search reveals that Captured Tracks' Mike Sniper is also a fan of "Something's Got To Give".  In his blog posting on it Sniper explains that the group took its name from this family of Andy Warhol pieces: