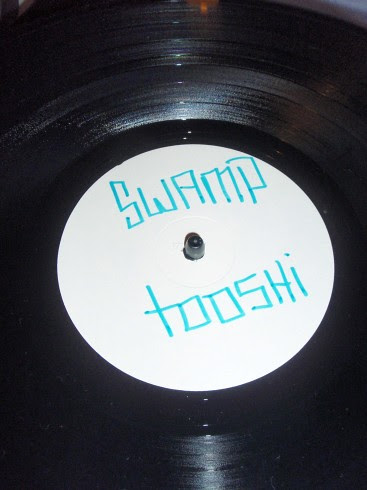 It's not too tricky to pinpoint who New Haven, Connecticut's Estrogen Highs were listening to whilst making their second lp, "Friends and Relatives" (Gramery). The grooves are bursting with little moments reminiscent of  classic Kiwi pop groups such as The Bats and The Clean.  A couple of tracks - "The Supposing View" and "Alley Man" - even recall "Pass The Paintbrush, Honey" era Biff Bang Pow! which, of course, is no bad thing.  It's the kind of record that I could and probably would have bought and been very happy with at any point in the last 20 years.  They're at their best on the speedier, janglier numbers, especially the pleasingly rollicking "The Supposing View" but even the slower, more obtuse songs are interesting.  "Hand of Hearts" ambles into similar territory as The Beets (or before them Shimmydisc's oddballs The Tinklers) and b-side opener, "Graffiti Pt1" starts out like a cut from Nirvana's MTV Unplugged session but ends up a good few minutes later having sprawled psychedelically like a torpid MV+EE.
Wavves frontman Nathan Williams must be seriously narked that Estrogen Highs beat him to calling a song "Weed Queen". I mean, if Best Coast's Twitter feed circa summer 2010 (the last time I read it) was anything to go by, it would've made a fitting title for an ode to his then (now?) ladyfriend, Beth Cosentino.
(Check out "Irresponsibility" on their myspace and see if the words "Wish she was mine, she looks so good" pop into your head - maybe estrogen highs are just girls' teenage kicks?)
Posted by brogues at 01:20 3 comments: 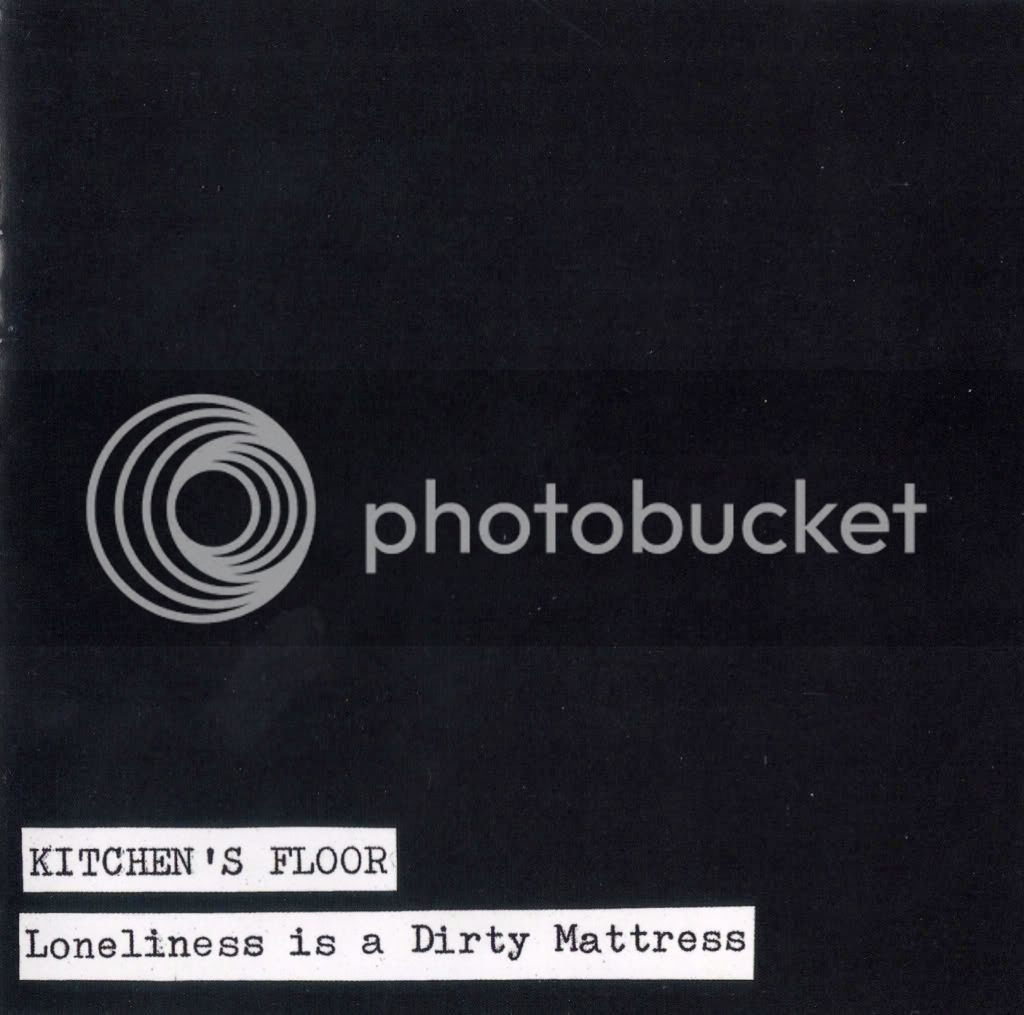 Consequently, Not Unloved has derived no end of pleasure from Australians Kitchen's Floor's debut lp.  Kitchen's Floor are the latest stop on a bus route that runs from The Red Crayola in the '60s to Swell Maps and The Fall in the '70s/'80s and Truman's Water, (early) Polvo and Huggy Bear in the '90s.  You just know that John Peel would've lovingly played several of their tracks at the wrong speed.  Frequently, the songs on "Loneliness Is A Dirty Mattress" (Bedroom Suck) test the patience, which is ironic considering the album's running time of about 20 minutes.  At times singer Matthew Kennedy comes across as utterly punchable, particularly when he's just repeating the same phrase over and over again at volume.  For example, on "Twenty Two" he repeats "I am in her room" to the point where you want to shout "Good for you!" in his face with all the sarcasm you can muster.  It's nice to be poked in the ribs sometimes, though, isn't it?  It's nice to be made to react.  Musically, Kitchen's Floor deal in turmoil.  Guitars churn in a way that leaves you edgy like you've downed too many workplace vending machine espressos and the percussion is more kitchen's utensils than Kitchen's Floor.  "Deadshits" (ahem) is the catchiest thing on the record.  That said, it still has a sizable drone element.  In fact, if it were longer, it could almost be their "Ditch The Fool".  A record best enjoyed at volume when pets and elderly relatives are safely tucked up in bed.  Great fun!
Posted by brogues at 23:55 No comments:

A recent Volcanic Tongue update prompted a determined poke around the 'net in a bid to hear as many of the tracks from the 7"s reissued so far by Last Laugh Records.  Kicking up dust in the shady corners of late '70s US punk is certainly not what I expected to be doing in early 2011 but it proved hugely enjoyable.  The Zeros' "Main Street Brat" was the best of what I turned up, all teacher dissing lyrics and Olympic standard sneering:

Next best was the almost comically English sounding The Normals whose fist-pumping "Almost Ready"* is fun to sing when you need to be somewhere fast on foot.  Unfortunately, it was sold out by the time I made my trip to VT but I snapped up The Zeros and I suspect it'll be one of the first onto the decks if I ever play 45s in public again**.
* - This rather fine label's name must surely be a doff of the cap to this song, mustn't it?
** - It was actually in my record box for the recent BMX Bandits tribute night but amazingly didn't make it onto the decks.
Posted by brogues at 00:36 No comments:

Email ThisBlogThis!Share to TwitterShare to FacebookShare to Pinterest
Labels: Music, The Normals, The Zeros

"Invited to a party hosted by The Pastels" - Lenzie Moss

Last night's Mono launch for Stuart Murdoch's collection of past writings, blog postings etc., "The Celestial Cafe", was made all the more appealing as it offered the chance for us latecomers to see Lenzie Moss for the first time.  This past couple of weeks I've listened to the songs on their bandcamp page a bunch of times and found myself increasingly smitten by their gently insistent guitars and Finlay's (MacDonald: formerly of Teenage Fanclub and the smashing Music and Movement, currently of BMX Bandits) soft, yet rich, voice.  A voice which will, no doubt, be most commonly characterised as a croon.  If it is a croon, it's thankfully not one which ever veers into the soulless, past-aping of some of his more Brylcreem slathered peers;  there's too much genuine melancholy in it for that. Their short set (5 songs?) was even prettier than I'd dared hope.  "Where Eagles Dare", with its less jazzy take on The Zombies' keyboard sound,  was a highlight as was the song from which the title of this post was lifted: "Kelvin British Summertime".  A song which is certain to inspire some historical jealousy.  The group play Glasgow's King Tut's this Sunday, 20th February.  Oh, and they've made some of their songs downloadable for free from bandcamp for a limited period.  Get on it!
Posted by brogues at 22:30 No comments: 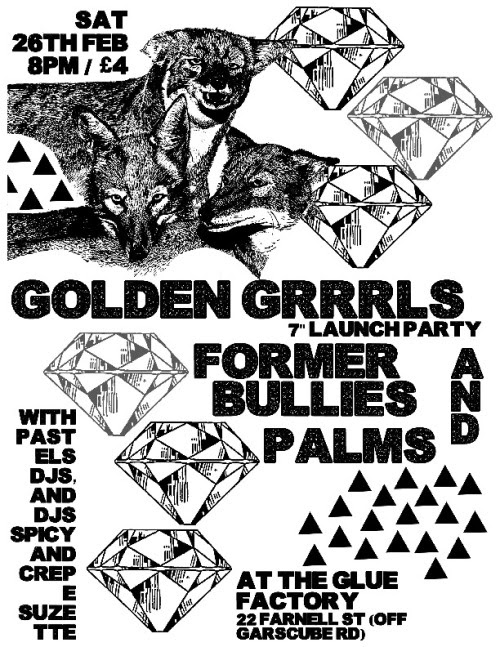 After what feels like an age, Glasgow's Golden Grrrls are set to release their debut 7".  Watching them develop across a bunch of live appearances over the last couple of years has been fascinating and, on the evidence of "Date It", they've upped their pop quotient considerably compared to those early, amped-up shows.  It's particularly pleasing to hear that they now have the confidence to give their vocals that bit more prominence in the mix. Roll on the 26th!
Date It by Golden Grrrls
Posted by brogues at 22:52 No comments:

If ever a band deserved to take centre stage on a record all of its own it's the The Hobbes Fanclub.  It's bound to happen very soon but until it does I'll content myself with wearing out their split singles: a 3" cd-r pairing with Young Michelin (Cloudberry) and a (soon to be released) 7" with Leach Me Lemonade (Dufflecoat).  Although they don't physically occupy separate sides of a piece of vinyl, their contributions to both records feel like they were intended to; with propulsive guitars and instant melodies, "Outside Myself" and "The Boy From Outer Space" sound like natural A-sides while the more subdued "And Just Like That" and "Love From The Stars" would make neat flips.  In recent years there can't have been many more glorious first singles than "Outside Myself" (I mean, what a solo!) and if there's a song with a more thrilling change of gear than happens 1 min 29 seconds into "The Boy From Outer Space" this year  I'll have to book a few hours in a flotation tank to calm down.