Not Unloved was, as is so often the case, slow on the uptake when it came to the classy soul/pop output of Big Crown Records. It was only when Lady Wray released her majestic "Queen Soul" lp in 2016 that it became unavoidable. Since then, of course, The Shacks have soundtracked an iPhone ad and released an ace debut lp (not to mention a run of wonderful 7"s, especially this charming li'l dancer), Paul & The Tall Trees released the sparse, brooding "I Explained It All" and Sunny & The Sunliners releases became mainstays of soul sections in the classier independent record shops. The quality of Big Crown's releases shows no sign of dropping-off any time soon if the debut 7" by Thee Lakesiders is any guide. Their name may hint at 60s garage orthodoxy - 'thee' is usually a giveaway, ain't it? - but "Parachute", the b-side of their debut single, is far more subtle and nuanced than that. A recumbent, floating affair with a sublime vocal and an undulating rhythm, it is tailor made for soundtracking warm summer evenings spent contemplating. The top side, "Si Me Faltaras Tu" is a far peppier affair. Sung in Spanish (duh!), it zips along in the verses before the multi-tracked vocals of the chorus crank things up a notch. Grindhouse film-makers need look no further for their next house band.

Big Crown, it would appear, are also releasing the debut lp by Bobby Oroza in 'late 2018'. In the meantime, they've had the good sense to reissue Bobby's stunning "This Love" single that got Not Unloved hot under the collar in May, 2017. A mandatory purchase for those who missed it first time round!
Posted by brogues at 19:08 No comments:

Recently, Annika Records shared a couple of videos heralding the imminent arrival of the debut Clay Hips album. Dating back to his time in The Fairways (thanks to Kris from Record Turnover for the hint all those years ago!), Not Unloved has carried a torch for the work of Kenji Kitahama. His disarmingly gentle voice never fails to move and his way with a soothing, winsome melody is a rare gift. The vinyl is pretty darned limited - 300: 150 copies on grey vinyl (which have sold out) and 150 more on black vinyl - so if the videos below charm your soul, spark up yr PayPal and head here to order before the rest of the world cottons on.

While Kenji is in my thoughts, it's worth remembering that his group with Swede Erik Hanspers, The Young Tradition, combined the adorable sparkle of prime Choo Choo Train with the heart-swelling brass of Love to create one of thee all time great pop moments that, had it been released on vinyl, would have been one of the finest 45s in the history of that medium (a bold claim, but undeniably true!):

As the years advance, I've become less and less able to make decisions. For example, choosing which record(s) to buy on any given visit to a record shop (or website, for that matter) has become increasingly difficult. The same applies to gigs. In Glasgow, there are often a couple of options to choose from on any given night and I struggle to decide which one to go to right up to doors open time. Given this, choosing what to go to on Friday, 1st June 2018 will be pretty tricky. I mean, just how does a self-confessed ditherer with my musical loves choose between the following?

Each of these shows will be special and on any normal evening would be my gig of choice. The Pastels are my favourite group ever so I've seen them many times before (though not enough for my liking!) and they're playing in a beautiful, non-standard venue. That's the obvious choice. The Shacks, however, are fabulous and I've never seen them before thanks to their gig with Khruangbin at the CCA earlier this year having sold out before I was even aware it was happening. It's at Broadcast, mind you, which is not the best venue in town. The Scientists, of course, are garage legends and, being Australian, are far less likely to roll through town again anytime soon. I suspect they'll be a riot in downstairs in Sleazy's, too. Ah, but Vital Idles have a truly special place in Not Unloved's heart and their Mono show is the launch party for their debut lp (out via the smart kids at Upset The Rhythm). They've assembled a great lineup, too. Argh! In terms of dilemmas, it's a nice one to have but it'll take some sorting. If I were deciding purely on the posters, The Pastels show would surely win out as Annabel Wright has created this gorgeous piece of art for it: 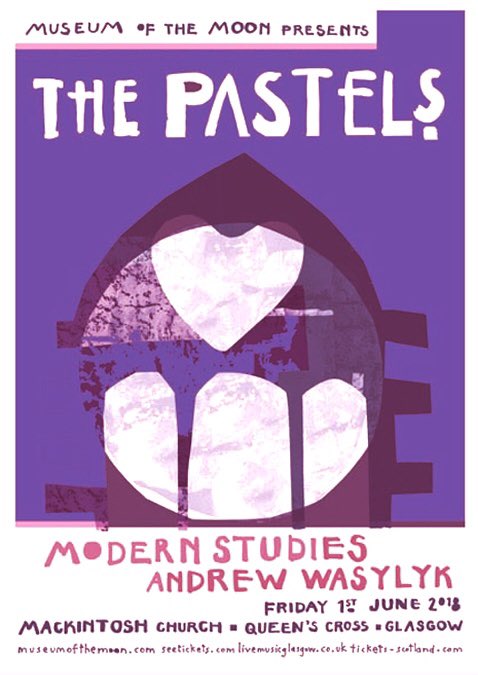 P.S. How fab is the latest Vital Idles song and video?