Two years ago the reactivated Crocodile Records released an ace 7" by The Phrogs which earned a few hastily tapped words on Not Unloved.   Next up for Crocodile is a fizzing 4 tracker from Cornwall's skinny tie/shaky leg merchants Planet Jazz.  "New To Try" bursts out of the traps with youthful vigour and never lets up for two minutes.  It's sure to lift the spirits of those who remember the prime powerpop of the turn of the 80s and anyone who treasures their #1s 7"s as much as I do.  Keep an eye out for it!

Out November 1st (pre-order up soon)
Posted by brogues at 20:24 No comments: 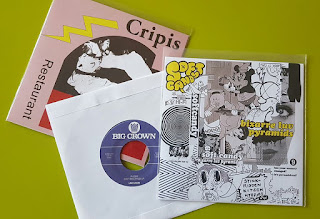 Los Cripis show up in Glasgow way more frequently than you would expect for a group from Argentina.  Their latest show with Current Affairs, Still House Plants and (Brighton's) Mortgage in the roasting basement of the Transmission gallery was another pleasing kick to the shins.  They still do slightly stern art pop better than most and their latest 7", "Restaurant" (Glad Fact), has already elbowed its way to the front of the recent purchases pile on a fair few occasions.

Somehow I completely lost touch with what Hozac Records was up to.  It was only when The Jeanies 7" landed in Monorail Music recently that I was reminded of their existence and went poking around on their Soundcloud page where I found faithful adherents of the early 80s Paisley Underground sound, Soft Candy.  Without doubt they have a fondness for The Rain Parade and who can blame them?  "Bixarre Luv Pyramids" won't earn itself any column inches in The Wire but you can bet your Chelsea boots that, should they hear it, Shindig! will flip their Brian Jones wigs over it.

Foolishly, my copy of Lady Wray's debut lp is still in the to-be-listened-to pile, its shrinkwrap intact .  On the evidence of the "Do It Again" 7" (Big Crown), however, it will be bursting with production detail, melodies to get you through the day and a voice that goes through the gears as easily as a vintage Jag.

I've pestered the good folks at Rubadub three times this week to no avail for a copy of the latest Omar S 12",  "Sky Train" (FXHE), which boasts an unexpectedly soulful vocal by Nite Jewel.  If there's a more uplifting, soul cleansing track around just now, it's yet to reach these ears.

Finally, the time has come to share the teaser for NUSONIC 001 with the world!  I've loved Vital Idles since witnessing their first gig in May, 2015 - I wrote about it here - and that love has only increased with each successive gig and with the release of their demo tapes.  If ever a band was suited to 7" vinyl it's Vital Idles so Not Unloved is super-excited to be able to help them onto their rightful format.

Vital Idles are Jess, Nick, Matthew and Ruari. In 2015 they leapt fully formed from the fertile intersection of Glasgow's visual art and music undergrounds. Their early live shows were a revelation, all ecstatic dancing and incisive tunes that betrayed an affection for the pioneering run of 7"s from the dawn of Rough Trade and the more pop slanted sounds from the worldwide DIY boom that followed. NUSONIC 001, the first release on Not Unloved Records, marks their vinyl debut following two stirring demo tapes and highlights a group equally adept at abrasive postpunk ("My Sentiments") and saucy pastoral pop ("The Garden"). Fans of Kleenex, Primetime and The Smiths are urged to take note!

In the 80s I loved Crackerjack. The best bit was when somebody got gunked (as happens 39mins 35secs into this clip).  I've bought so many records but gone to so many gigs of late (there's been quite a run in Glasgow in recent weeks: Terry/Woolf/Anxeity, Moritz von Oswald, The Goon Sax/Boys Forever/Spinning Coin, Cavern of Anti-Matter, Colleen Green/Cassie Ramone/The Pooches, Bill Orcutt/Okkyung Lee etc. etc.) that on those rare evenings when I do actually sit down to listen to them it feels akin to being sat in a Crackerjack gunking booth, voluntarily pulling the cord and getting soaked to the skin by new music.  At the most recent gunking these are the 7" singles that widened Not Unloved's eyes the most:

What a heart melting slice of bounce-pop!  Tangible Excitement! have tremendous pop pedigree, being a collaboration between Scott Stevens, (singer with The Earthmen, Summer Cats), Stewart Anderson (Boyracer and a million other fab groups) and Mark Monnone (The Lucksmiths, Monnone Alone etc).  For good measure Louis from The Zebras/Bart and Friends guests on guitar, too.  On the flip there's an irresistibly fizzy cover of Tiger Trap's much cherished "Puzzle Pieces" that rivals the original in terms of sheer joy.

I don't think I'll be hearing from any lawyers if I say that The Jeanies have a fondness for the records of Big Star and Milk'n'Cookies.  That, of course, is no bad thing and when they can craft melodies as instantly memorable as "Amilee", they'll earn admiration for more than just having fine record collections.

At a recent gig a friend declared that they were officially over the 60s garage sound and never needed to hear or see another group so fixated on that period ever again.  It being 2016 and hence a whole five decades since the bulk of the touchstone records of that ilk were released, I could see their point.  Then I heard the latest blast of downer garage jangle from Hamburg's The Wrong Society's and knew I wouldn't be turning my back on that sound anytime soon.  The sombre "Don't Know Why" on the flip is particularly beguiling and would earn its place among the greats on any one of my favourite volumes of the Teenage Shutdown series.
Posted by brogues at 10:48 No comments: