For many years now, Saturday mornings have started with sleep-listening to Brian Matthew's Sounds of the Sixties on BBC Radio 2.  As with Peel's show, he plays such a wide range of material that I never like everything but every once in a while he'll play something new (to me) that cuts through the haze and has me scurrying to the internet.  This week it was romantic beat merchants Marshall Scott Etc..  Unusually, my search turned up a great British Pathe video in which the group step Mr Benn-style straight out of a gentleman's outfitters - check the guitarist's tartan trews! - into the grounds of Woburn Abbey to mime their tender 'Same Old Feeling' single:

Looks like the drummer went to the Ringo Starr school of larking about and smiling!  With its easy charm and sun-steeped melody, it's hard to believe that 'Same Old Feeling' wasn't the handiwork of a bunch of tanned Californians.  Now to find a copy on 7"...
Posted by brogues at 21:24 1 comment:

A trip to a record shop just isn't complete without at least one 7" sneaking into your bag is it?  The other week it was a new Vampisoul release which pairs a Colombian original by Elia Y Elizabeth with a cover another of their songs by Elefant Records' Single.  'Alegria' by Elia Y Elizabeth is beautifully constructed: verses of gentle, sunny day funkiness that slip with ease into a chorus of brassy exuberance.  It's just so endearing!  Vampisoul's parent label, Munster Records, has released this fine looking item by the sisters which, should it find its way into, say, Monorail's racks (hint!) will find a willing purchaser...

Single's take on 'Soy Una Nube' on the reverse is a more beat-driven affair that skulks somewhere between the brilliant bri-nylon pop of Saint Etienne circa "Nothing Can Stop Us" and a US 70s cop show theme.  An unexpected ESG sample seeps in around halfway through and pops up again at the end by which point you've already reached for the modern tools of evangelism.

Single is a duo (ha!), both of whom - Ibon Errazkin and Teresa Iturrioz - were in the eternally elegant Le Mans whose 90s records for Elefant were things of gentle wonder, especially their double 10" "Saudade" which still gets semi-regular spins on the Not Unloved turntable.  It's great to be reminded of their music and good to hear that they're still making lovely records (which sometimes have freaky covers!).

Glaswegians: As of 2 days ago Monorail had at least one copy of this essential 7" left.  Get on it! 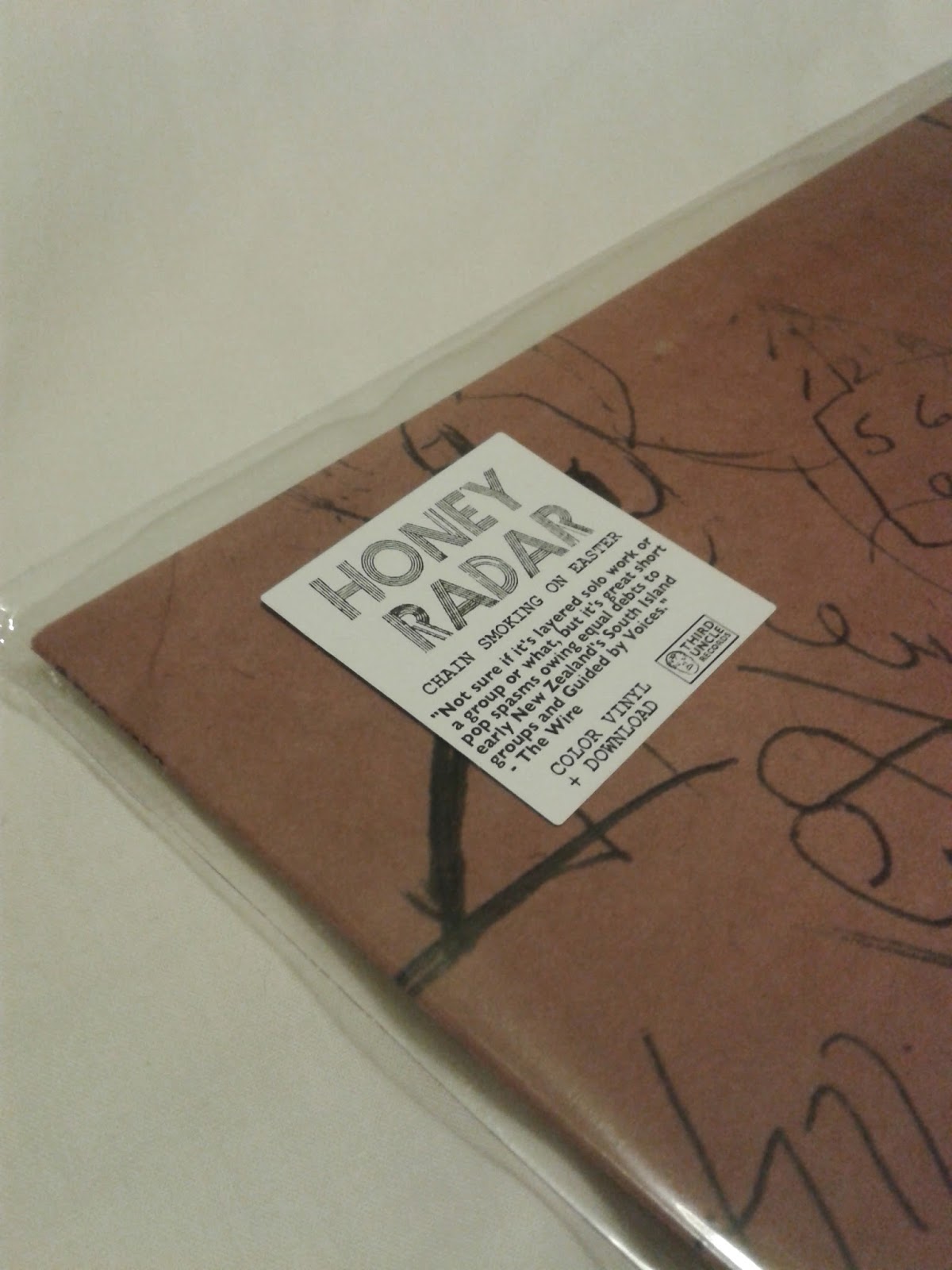 In true Not Unloved fashion, I feel the need to outline the typically haphazard way in which the outstanding Honey Radar lp "Chain Smoking On Easter" came into my life.  A while back my pal R asks if I follow (fanzine/podcast) Dynamite Hemorrhage on Twitter.  I say 'no' but duly rectify that.  DH then tweets with pride that one of the Ugly Things writers has listed it among their favourite things of 2014.  Being nosier than is decent and an obsessive digester of favourite things lists, I scour the aformentioned 'The Best of 2014 According To a Bunch of Ugly Things Writers' page and let out a little gasp when my eyes alight on this description:

Kitchen-sink psych-punk (ala Swell Maps, Television Personalities) using economy as a calling card, interspersed with ‘60s licks, noisy bits and a harmonious instrumental interplay. An assault of sixteen tracks blasts forth in a mere 21 minutes, and brings to mind the earliest moments of Pavement.

Maybe 32 seconds into streaming the album's arresting opener on bandcamp I was manically searching for a UK distributor.  Luckily Rough Trade had the smarts to stock it so a costly and fraught airmail experience was avoided.  There isn't a wasted second or the semblance of something I'd change given half a chance to across the entirety of this record and I certainly wouldn't be plum crazy enough to wish it had been recorded in a plush studio and not in the Richmond, Indiana home of Jason Henn.  At around 1 minute and 47 seconds, I used to believe Primal Scream's "Velocity Girl" to be the ultimate short duration pop song.  Then I heard The Charlottes' even shorter "Are You Happy Now?" and realised it wasn't.  At 47 seconds, however, "Alabama Wax Habit" makes the pair of them look like ponderous prog epics.  It makes its point and makes off with your heart in just 47 seconds.  Its tinnitus inducing (only in the left ear if you listen on headphones, mind) ultra-high pitch jangle is a sound beamed straight from my dreams.  In three decades of jamming Robert Pollard never happened on a more succinct but fully realised meeting of sound and melody.  "Birds Reunion" is the loosest, free-est recent rendering of the classic early Flying Nun Records sound.  In summary, "Chain Smoking on Easter" is pure orange sherbet and the most easily lovable missive from the US underground I've heard in years..  Thinking back, I don't recall being so concussed or made so madly evangelical about a record since "Eyes Rind as if Beggars" by The Garbage and The Flowers jump-started my heart and flooded my brain till it couldn't take anymore.  The new Twerps lp, the Go-betweens box set, those Pip Proud reissues etc. will have to wait to earn my love as Honey Radar won't be budging from my turntable any time soon.