"Frozen Disease" by Norway's I Was A King gets me in the heart every time.  Every time.  Its dense array of burnished guitars and vintage organs combine with singer Anne Lise Frøkedal's rueful voice to exquisite effect.  There are the tiniest echoes of the much missed Trish Keenan in Frøkedal's phrasing and handling of the melody.  Maybe that's why it makes me so emotional.  I guess the swells have something to do with that, too.  Whatever the reason, I feel it every time.

Stream and buy their "You Love It Here" album here (N.B. There is a lovely vinyl issue, too!).  Impeccably produced by Norman Blake and Robyn Hitchcock (!), it was released in autumn 2012 and was their third album.  I'll definitely be sifting through their back catalogue in search of more gems after hearing it.
Posted by brogues at 00:06 No comments:

Email ThisBlogThis!Share to TwitterShare to FacebookShare to Pinterest
Labels: I Was A King, Music, Norman Blake, Norwegian pop, Robyn Hitchcock

A friend - thanks, Jon! - introduced me to them last night and although I've not fully assimilated all the clips on YouTube, I'm totally sold on their brand of thin, rattly/rusty post-punk and can only wholeheartedly agree with Captured Tracks' assessment:

"Collected here is a rediscovered gem showcasing the zest and spontaneity that gripped the UK DiY scene of the time, standing up to their contemporaries like Television Personalities, The Homosexuals and Marine Girls."

I felt a little guilty that in 2012 such a high proportion of the records I bought were archival releases or compilations and not the new records by extant groups.  I resolved, therefore, to buy fewer reissues this year.  If labels keep unearthing wonders like Bona Dish (that name has to be polari, doesn't it?), however it's going to be a tricky resolution to keep! Hopefully, this record will go some way to quietening the dull accusations of 'hipsterism' that seem to be getting tossed in Captured Tracks' direction with increasing regularity.  I've never met Mike Sniper but from the outside it seems pretty obvious that he's just an enthusiast with a genuine love for certain styles of music and sounds who releases records for the right reasons.
Posted by brogues at 11:51 No comments:

The oohs have it

Sometimes a tambourine and a pretty voice repeatedly singing 'ooh' is more than enough:

To be fair, Seapony's "Nothing Left" (from the group's second album for Hardly Art, "Falling") has so  much more than that to recommend it.  There's the intro; played in a manner so redolent of Felt's Maurice Deebank.  There's the dreamy, unfussy guitar solo.  There's the brittle crispness of the recording.  I would probably have overlooked "Falling" if the astute duo behind Soft Power Records hadn't placed it so highly - number 6 - in their 2012 year end list.  I'm totally grateful to them for the reminder.
Posted by brogues at 21:19 No comments:

So far, Andy Stott's "Numb" is the most arresting piece of music released in 2012 that I've heard for the first time in 2013.  I've not been in  this much of a lather about a piece of electronic music since Motion Sickness of Time Travel's "Luminaries and Synastry" or possibly that slinky, woozy first Maria Minerva 12".  "Numb" opens  Stott's most recent album,"Luxury Problems" (Modern Love).  I spied the double vinyl version in Monorail Music a few months back and although I instantly adored its cover image* (that's it above) decided that I couldn't at that time afford the 24 quid asking price.  How I regret that decision now that it's sold out from boomkat, Modern Love's distributor SRD, Norman Records etc.!  "Numb" is like a Steve Reich vocal composition or a cover of an unreleased fragment from Arthur Russell's heavenly "World of Echo" recast as an uncommonly elegant slice of soulful dance (?) music.  The repeated sonar pulse of the word 'touch' is inexplicably compelling and I suspect I'll never tire of hearing it.  It's great that in dance music it's no longer obligatory to get in a shouter to wail over your beats; subtlety is invariably best.  If the rest of "Luxury Problems" (sure, I found the whole thing on YouTube but I'm saving myself for the vinyl repress should one materialise soon or failing that the cd version) approaches "Numb" in terms of quality, it will monopolise my turntable for some time. Spellbinding.

* - A similar sleeve I fell (ha!) in love with in 2012 was that which adorned Raime's "Quarter Turns Over A Living Line" (Blackest Ever Black).  With diving show Splash! on ITV and these two fabulous sleeves, diving would appear to be in the air. 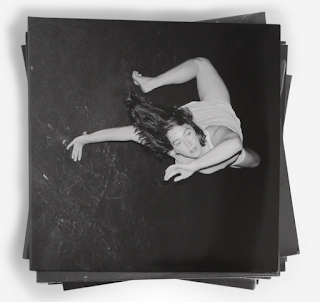 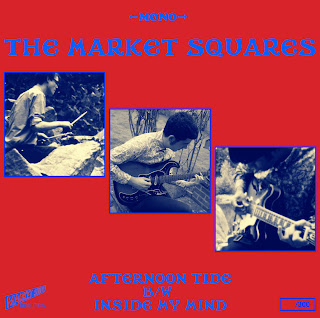 Paul Messis ("the young king of all things '66" according to, ooh, Not Unloved) got a brief mention in yesterday's posting about The Higher State.  Today, he gets one all to himself.  His new group The Market Squares release their debut 7" on his new label Market Square Records on February the 4th, 2013.  His aims as outlined in his introduction to the new label are laudable so I can only wish him all the best with it.  If his future releases are as enjoyable as "Afternoon Tide" I'll be a keen and vocal supporter:


That psychedelic guitar line that wanders all over the place like a tipsy Freshers Week student is just great as are the none-more-English vocals.  If this had come out at the same time as the early 45s by The Times, I'd no doubt be checking discogs and ebay on a regular basis in search of an affordable copy so I'll definitely be buying it as soon as I get the chance.
Posted by brogues at 21:43 No comments: 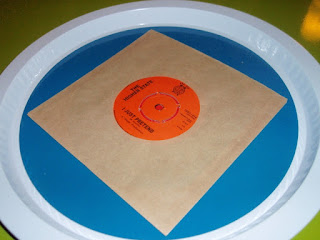 The Higher State really do have a surfeit of great melodies.  It's actually mean of them not to share just a few of them with the other similarly mid-60s fixated groups.  Their new 7" for 13 O'Clock Records was in my postman's sack the other day and it's another prime chunk of Byrds inspired folk rock.  For added period artefact authenticity it has one of those push-out centres for jukebox owners.  Of course, there's no way I'll be pushing it out - that would be like slashing a Bridget Riley painting.  It's exciting to note from this picture that their lineup has been enhanced with the young king of all things '66, Paul Messis (front right), and...er...Austin Powers.  Fans of The See See should be particularly enamoured with what they hear, below.

When I hear these loving recreations of the best of 60s music, part of me wants to have another go at donning the old Breton fisherman's cap, parka and winkle-pickers.  Then I remember that the last time I tried that my colleagues took great delight at singing "In The Navy" and "Y.M.C.A." whenever I walked by.  Philistines!

(It's available from the group's ebay store.)
Posted by brogues at 21:53 No comments: 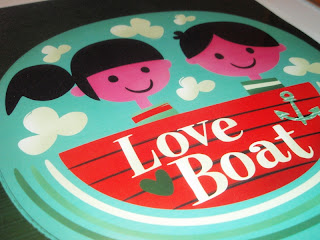 Pintachan is the name of the artist responsible for the winningly cute picture, above.  It was bought from Brighton's most aesthetically pleasing toy shop Rocket Science.  If I'd had unlimited funds and hadn't been heading to London for the Chickfactor* shows I would've bought a few more examples of Pintachan's wonderful art.  On gloomy days such as this, "Love Boat" is a reminder of a brighter, softer world.  A simple pleasure.  If you see me wearing a flower badge or one with an endearingly vacant little spaceman, they're Pintachan, too.

* - Have you got your new issue yet?  It comes highly recommended!  Glaswegians can snag a copy from Monorail Music. Where else?!
Posted by brogues at 21:03 No comments:

Dan Treacy released some cracking records in the 80s via his Whaam! and Dreamworld imprints.  On the evidence of Vinyl Japan's excellent mid-90s compilations, of the two, I would always, if asked, say I preferred Whaam!.  The Looking Glass single on Dreamworld, however, was a joyous romp that, for my money, stands up well to a fair chunk of the Whaam! output.  It's almost (only almost, mind!) unbearably chirpy, not unlike a more whimsical, sunshine pysch version of The Housemartins or a less lysergic/more sherbety version of The Bachelor Pad.  I haven't read any fanzine (weekly music press?) reviews from the time but I suspect that it was never the hippest record but that's not something to deter Not Unloved!  Copies don't crop up for sale all too often so it was a slight a disappointment that my bid wasn't enough (it went for a comparatively sensible 24.55 GBP) to secure the beautifully preserved copy that appeared on ebay last week.  Ah well, it leaves a little more money to spend in Monorail Music.  After all, I don't want them going the way of HMV.

Do You Really Wanna Know Why Yr Still In Love With Me?

As band names go, Joanna Gruesome is certainly not one of my favourites.  As sounds go, however, their clattering, feedback-riddled guitar pop is absolutely one of my favourites.  Of the current crop of  groups to marry sweet (but definitely not 'twee' - they'll batter you if you so much as whisper that word in the same postcode as them!), non-shouty voices to riotous guitars, they're probably the most fun outside of Gold-Bears*.  The frenetic 30 or so seconds before the final 14 of their "Do You Really Wanna Know Why Yr Still In Love With Me?" single (Happy Happy Birthday To Me) are a thrill ride the likes of which I haven't experienced since I listened to The Charlottes' mighty "Are You Happy Now?" on headphones whilst falling down the stairs.  Much more of this and they'll have me feeling young again!  Just as well they have that 14 second warm down at the end.  A man of my age would surely overheat without it...

* - Gold-Bears recently posted a cover of the most tender-voiced, evocative Clientele song.  Of course it doesn't top the original - how could it? - but it's a mighty fine version and well worth a spin or two.

Note the typically great Andy Hart artwork.  I tell ya, if I was doing a label again, I'd have him do a sleeve or two!


(Brits can snag a copy from Soft Power or Pebble.)
Posted by brogues at 20:41 No comments:

Kent time again! Their Apollas compilation had been winking at me from the cd racks for a while and when I finally took the time to do my homework and heard "Mr. Creator" I knew I'd be cheerfully parting with cash for it (see, some folks still spend money on physical releases!).  Occupying similar musical ground to The Flirtations' "Nothing But A Heartache", it benefits from one of the best (re?)mastering jobs I can recall hearing; so powerful, so bright.  Lead singer Leola Jiles glides effortlessly through the gears from girl group sweetness to gospel wailing without overdoing it in either direction.  How I'd love an original 45!  Hopefully a fair proportion of the cd's other 24 tracks are similarly immense.  Kent wins again!
Posted by brogues at 21:55 2 comments:

Bleached vs. Nikki & The Corvettes

Succinct pop, that's all I crave these days. Make it a little punky, too, and I'm doubly likely to lap it up. Bleached do the succinct/punky thing beautifully on their forthcoming single "Next Stop" (Dead Oceans):

Three decades ago Nikki and The Corvettes pulled off the same trick on "You Make Me Crazy" from their debut lp:


It's a total smash and grab head-spinner whose guitars are that little bit crisper than those on "Next Stop" and all the better for it. Mind you, it doesn't have that song's tremendous backing vocals. Whatever, both tunes have the desired effects (pogoing, brain-emptying etc.) and I'm pretty sure that I made a coupla new squeaky floorboards as I bounced around to them earlier.
Posted by brogues at 00:59 No comments: