What a year 2013 was for lps!  For a chap with my predilections, the release of a new Pastels record was always going to be the main event and so it transpired.  From the songs which peppered their live shows over the years, I knew with some surety that "Slow Summits" was not going to disappoint, a sense that was only heightened when Annabel Wright's gorgeous sleeve art was revealed early in the year.  And "Slow Summits" is something special: refined, reflective and detailed.  For a while I listened to little else besides.  In Glasgow, it felt as if everyone got wise to the brilliance of Ela Orleans at almost exactly the same time. Her terrific double-lp "Tumult In Clouds" (currently out of print but soon to be re-pressed on her own Parental Guidance Records) was actually released in mid-December 2012 but only came to my attention via a Monorail Records tweet in early 2013 so I've decided to make it eligible for my list.  From the list below, it would appear that Not Unloved had treble in mind with The Mantles, Dick Diver, Ginnels, The Prophet Hens and many more releasing exquisite, jangly guitar saturated lps.  2014 can't possibly be better can it?  We'll see...

(Click the titles to hear a song!)
Posted by brogues at 00:16 No comments:

Email ThisBlogThis!Share to TwitterShare to FacebookShare to Pinterest
Labels: Best Records of 2013, Music

All The Time In The World

Clapping along to "All The Time In The World" was actually made mandatory by an Act of Parliament in 1968.  In the 16 years since I bought the cd (from Glasgow's dearly departed John Smith's record department) it never once occurred to me to look for it on vinyl.  Then, a week or two back, a rather lovely looking (allegedly unplayed!) picture sleeve 7" with it on the b-side cropped up among a French ebay seller's items: 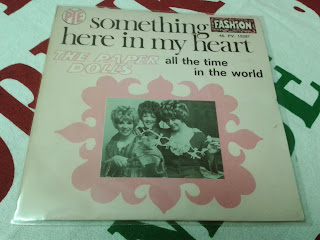 Strangely, nobody else bid on it so it was mine.  If I ever play records in a shambollic manner to an uninterested throng again, it'll be the first 45 in my box.
Posted by brogues at 09:39 No comments: 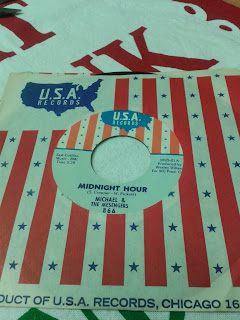 Wilson Pickett's classic version may be much more widely known but there's something about Michael and The Messengers' sprightlier, more youthful version that keeps me coming back to it.  Wisely, The Messengers didn't just try to replicate Pickett's version - how could they ever have won at that game?.  By quickening the tempo, replacing the horns with keyboards and rattling a tambourine for the entire 2min 32sec duration they upped the pop factor. It must have packed the dancefloors at high school record hops the length and breadth of Milwaukee!

Email ThisBlogThis!Share to TwitterShare to FacebookShare to Pinterest
Labels: Michael and The Messengers, Music, Wilson Pickett

Most enjoyed singles of 2013

Denise and Company "Boy, What'll You Do Then?" (Big Beat)

Should've been the A-side:

Digital single that should've been on vinyl:

The Creeping Ivies "What Would Joey Ramone Do?"

What a year for the 7" single!

The Sultanas "You're The One"

The Sultanas' "You're The One" 7" (2005-ish, Boom Boom Records) found its way into my collection through a variant of the usual process. I didn't fall for its Headcoatees-like charms through reading about it on a blog or being recommended it by a friend.  Instead, less prosaically, I chanced upon it whilst sifting, YouTube to hand, through a discogs "seller's other items" list looking for something/anything cheap that would be nice to get postage-free when buying another record from abroad.  Whatever the route it took to my attention, there's no mistaking the fact that "You're The One" is superior Girls In The Garage fare that sounds better with each play and with each upwards turn of the volume knob.  A quick Google didn't turn up much information about The Sultanas save for the fact that one member was subsequently in Sub Pop's The Duchess and The Duke (who toured with The Vaselines, if I'm not mistaken).  There don't appear to be any more records to track down which is a real shame as I'd love to have more crunchy Sultanas vinyl to knock me back into shape whenever I need it!


When they're done right, Christmas singles are unbeatable!  So far this winter, Swedish group The Garlands (Snowflakes Christmas Singles Club) has delivered the most luxurious, most wholesome, most heart-swelling Christmas song to find it's way into Not Unloved's seasonal record box.  It's as beautifully arranged and confidently played a slice of (winter) sunshine pop as I've heard all year.  That they've covered the heavenly Margo Guryan's "I Don't Intend To Spend Christmas Without You" on the flip-side is simply the cranberry sauce on the top.  Their lp for Shelflife was a blast and their cover of Wham's "Freedom" from their Cosy Den cd-r a few years back was a mix-cd staple at the time so it's no surprise that they've produced such a divine Christmas record.

While I'm on the subject of Christmas records, from the snippets available online, Norman Blake's other group, The New Mendicants, has a rather fine festive 7" on the way.  It's due for release on December the 23rd.  Hopefully, copies will find their way into Monorail in time for Christmas!
Posted by brogues at 14:11 No comments: