Thanks to everyone who bid on a shared the link to this blog and to the auction itself.  Bidding closed at a fabulous 470.00 GBP.  Thanks, also, to the winning bidder for their tremendous generosity for a great cause. 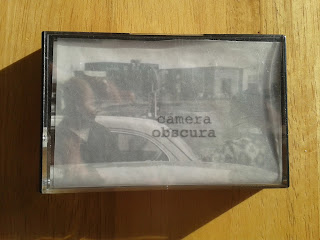 A little over a week ago Carey Lander from Camera Obscura tragically succumbed to bone cancer at 33.  I didn't know her well - we only shared a laugh or two on a couple of occasions - but I loved her keyboard work with Camera Obscura and those I know who knew her always spoke of her with great affection.  She was a lovely presence round town and will be missed.  In the last few months Carey raised an amazing amount of money for the cancer charity Sarcoma UK.  In her honour, I'd like to make some sort of contribution so I'm selling an extremely rare 1997 homemade Camera Obscura demo tape via ebay.  This predates the group's beautiful first single, 'Park and Ride'.  100% of all funds raised will go to Sarcoma UK and postage is free to anywhere in the world.  Please take a look at the listing and it would be much appreciated if you would pass it on to anyone who might be interested.

Thanks for your help,
brogues

David Pollock's touching obituary for The Scotsman is here.

Some interesting details about the tape/artwork from the official Camera Obscura Facebook page:

"An extremely rare item is being auctioned for Carey's Sarcoma UK campaign. An original 1997 demo tape from us. Not sure how many of these we made back in the day, realistically it was probably 10-20, I doubt any of us still have one lying about (I certainly don't). The sleeve was taken from an old photograph taken in Spain, and given a bit of a Peter Saville design-style tracing paper cover like New Order's Low Life album. Worth bidding on to help a great cause, and certainly an interesting and fairly unique piece of Obscura history."
Posted by brogues at 19:31 1 comment:

One of the reasons why Not Unloved went on an unplanned summer long hiatus was that a cavalcade of great bands stampeded through Glasgow.  Staying up late more often than is sensible makes it a little tricky to remember the half of what went on but one thing is for sure, no group played harder (the guitarist broke a string on the first song!) or more thrillingly than Brisbane's, Blank Realm did at The Hug & Pint in September.  David and Heather Leigh from Volcanic Tongue cajoled me into buying Blank Realm's records a while back and, sure, I got all steamed-up over them but they just didn't suggest that, live, Blank Realm would scorch the paint from the walls whilst branding BR in a heart on my heart forever.  Guitars careened between ultra-fast garage jangle to blazing effects pedal wallop and back in thrilling instants. Perversely, maybe, the little of run of quieter songs for which vocalist and drummer Daniel Spencer emerged from behind his kit to sway centre stage is the bit I have replayed in my mind most often .  'Dream Date' from the recent 'Illegals In Heaven' (Fire Records) lp was the real scene-stealer - the best 80s Brat Pack high school prom clinch soundtrack ever.  Some Monday nights are better than others.  Some Monday nights are unforgettable. 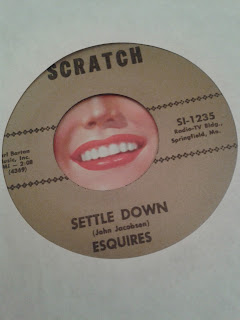 You can read about The Esquires over at the always reliable Garage Hangover.
Posted by brogues at 19:00 No comments:

The Squares "This Is Airebeat"

- The Squares "This Is Airebeat"

The Squares released "This Is Airebeat" in '79 so I'm guessing that these lyrics were a rebuke to the legions of disaffected punk kids lurking around town centres spray painting 'No Future' on every spare inch of wall space.  I'm sure, too, that those punks just shrugged dismissively and ignored them, thinking that they were well named.  Still, it's a sweet pop tune and with such clean guitars and crisp vocals it sits well with some of the acts on Slumberland Records such as Literature  or Devon Williams. 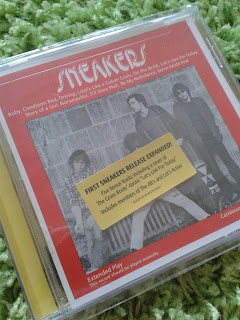 If cartoon think bubbles had appeared above my head on today's amble through the park, they would mostly have contained randomly ordered lines from "Ruby" by Sneakers: "Talk is cheap!", "It's funny, you don't look like a character assassin", "Slander me, I'll libel you" and so on.

When I wrote previously about one of Chris Stamey's pop masterpieces I knew then that I didn't know enough about his other work.  Ominvore Recordings have filled-in some of the gaps in my knowledge with their CD release* of his 70s work (and that of Big Quiet and R.E.M. producer Mitch Easter) with Sneakers.  Coming on a like a tougher Big Star, they made the kind of melody riddled power pop that zines like Bucketful of Brains brought to suburban bedrooms the nation over in the wake of R.E.M..  Their take on The Grass Roots'"Let's Live For Today" is a real highlight.  It bursts from the speakers with such verve that it's impossible not to belt out "Sha la la live for today!" at the top of your lungs; neighbours be damned!

* - There was a US 10" for Black Friday 2014 but, if the location of the sellers on discogs is any guide, not many copies made it to Europe.
Posted by brogues at 17:00 No comments: