Songs like "You're My Lover" are so great as they prove conclusively what a know-nothing blowhard I was in in the past when I argued that there was very little or no good music made before punk in the 70s. It's such an urgent, touching tune that it never becomes background music.  There were evenings this year where this was the only song I listened to.  It's still  available (why it didn't sell out in minutes upon its release is a mystery) on 7" via France's Pop The Balloon Records here.   Pop The Balloon also sells on discogs so finding a copy couldn't be easier.

The Australian group Terry not only made one of Not Unloved's favourite lps of 2016 but they also introduced me to this stunning Dion and The Wanderers version of a Tom Paxton song by including it on the free mix CD that came with initial copies of their lp when ordered via Monorail Music.  In the days that followed hearing it for the first time I bored anyone foolish enough to linger in my presence for more than a second that it was exactly what I'd always hoped Bob Dylan would sound like. The La's would have walked barefoot over broken glass for its intro and timeless melody.  For a few days I was the proud owner of a (supposedly) Mint- copy of it but then the discogs seller had to admit that they couldn't find it and a full refund was issued. Shame.

When a friend shared"Losing You" on social media after hearing it again (he's more in touch with popular culture than me!), I wasn't looking for a new obsession.  I had plenty obsessions to be going on with, thank you very much.  But it did become an obsession and if YouTube clips deteriorated through overuse as old VHS tapes used to, the clip above would be unwatchable for everyone else by now. Thanks to another French discogs seller, I can luxuriate in the 12" till the vinyl wears thin.
Posted by brogues at 14:39 1 comment:

Back in my Tinseltones days I put out Toulouse's "Checks and Credit".  I was so proud of how it turned out: dazzling/dizzying tunes, gorgeous sleeve (more than a hint of Belle and Sebastian's art style, ahem!) and heavyweight Czech vinyl.  I just noticed that it was shared on Soundcloud:


Nearly two decades on it still sounds fresh and vital (ha!) and I feel proud all over again.  If only I still had a bunch of copies.  I'd give them to people who would love them.  Still, it''s pretty cheap on discogs.  Go on treat yourself...it's Christmas!

P.S. Note the note on the discogs page:

"remember the lost bands who never had a hope: "checks and credit" by toulouse, it was scratchy, it was great"
(comet gain: "the ballad of a mix tape")
Posted by brogues at 20:41 No comments:

Release day! / where to buy the Vital Idles 7" 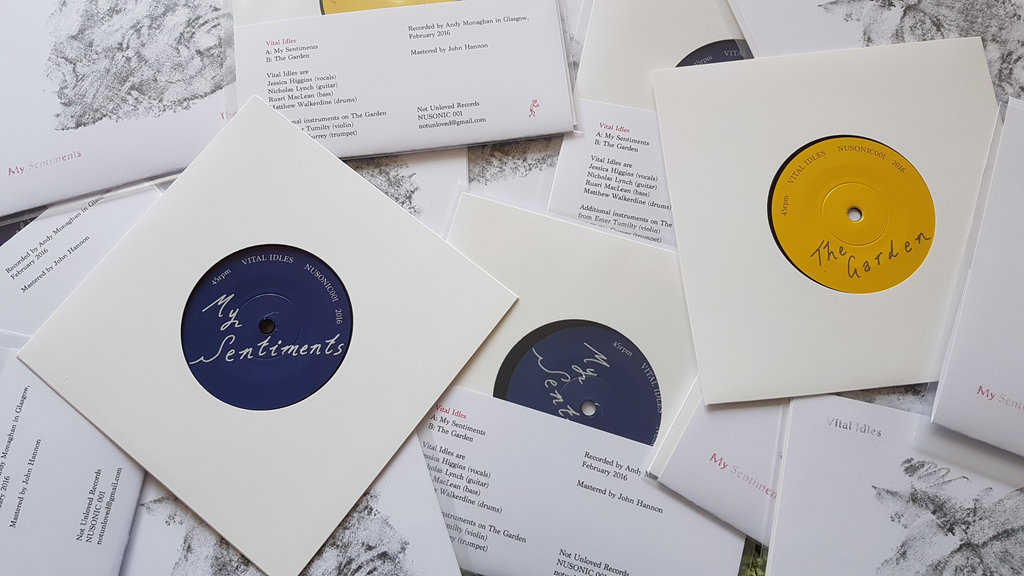 Despite the gloomy state of record sales for wee labels, Not Unloved is still chuffed and proud that today the Vital Idles single was finally released.  Thanks to everyone who has already pre-ordered/ordered the single.  Thanks, too, to everyone who has written about (Did Not Chart, Poplib, Ski Pie Rage, I Left Without My Hat, Polaroid etc.) or played it on their shows (Rocker at Dandelion, Futures & Pasts, Alan Godsell at Radio Saltire, Dana Katharine at WPRB etc.).  The record is distributed via Cargo in the UK and is available from these fine places: