If Galt Toys sold a craft kit for assembling your own pop record, the chances are mine would end up sounding a lot like Sauna Youth's "Oh Joel".  It really could've been made to order for Not Unloved!  It zips along, it stutters, it fuzzes, it's uncomplicated, it has clear, slightly petulant female vocals, it has a guitar solo that Brian May would look down on and it has Joey Ramone on the cover, for goodness sake!  It's like a now-fi version of The Fizzbombs.  Fab!


(Big thanks to @NorthernLight27 for the tip. I would never have picked up on it given that the A-side is a cover of a song by the abysmally named Pissed Jeans.)
Posted by brogues at 17:55 No comments:

Excitingly, it's only a week now till new pop upstarts Golden Grrrls launch their debut lp at Stereo.  It feels like it's been a long time coming but on the evidence of their fizzing singles and the two tracks on the lp's bandcamp page, it's going to be an essential purchase that'll take some shifting from my turntable.  Support comes from Joan Sweeney's (of Aggi Doom) new group Seconds and Manchester's saucily named (blush!) but brilliant Sex Hands.  Unmissable! 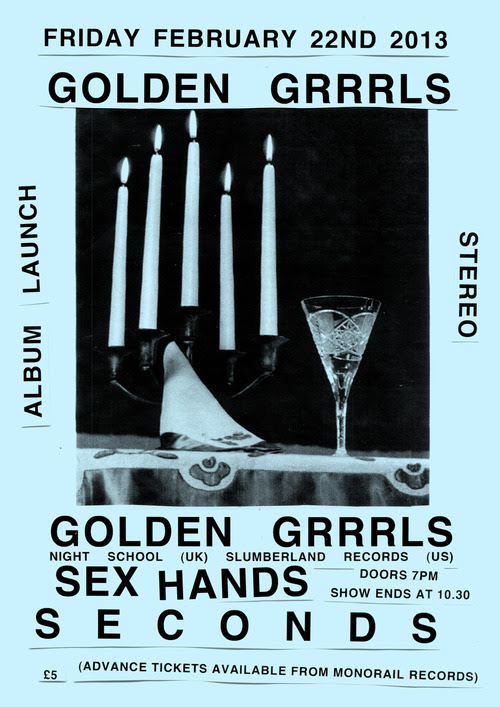 The following weekend, a new pop night, All The Rage at Blackfriars, will fill the void left by National Pop League's departure a few years back.  With such a fine list of groups listed on its flyer, attendance for all pop minded Glaswegians is mandatory.  Best buff up yr dancing shoes, then!

"Dumb Me Down" by Francis Macdonald

This post was inspired by a recent conversation in which a (fairly inebriated) friend of a friend bemoaned a perceived lack of music listening development shown by the 'adults of today'.  He reckoned that people should graduate from obsessing over mere 'pop' music to concentrating on more serious, complex forms of music that require more thought from the listener i.e. classical music.  I could sort of see his point but, given what I choose to write about on Not Unloved, I couldn't really agree with it.   I've been to a fair few operas and classical concerts, bought and received a fair few classical recordings and have, by and large, enjoyed them and taken the time to try and understand them.  For some reason, however, I just haven't felt as moved by them as I have by the recordings I write about here.  I don't think that's evidence of stunted development or of me taking the easy way out by listening to simplistic, childish music because classical music is too difficult to understand.  I think it's evidence of my not quite feeling classical music in my soul.  The recent documentary on the life and works of Frederick/Fritz Delius featured some scenes of people in raptures, almost moved to tears  listening to his compositions and I would love to have felt the same but I just, well, didn't.  There are exceptions.  What I've heard by Arvo Pärt, I've been moved by, especially when it was performed in Glasgow's Royal Concert Hall lit only by candles.  His "Cantus In Memoriam Benjamin Britten" - as featured recently on an excellent, thoughtful mix by The Wake - has always affected me deeply.  I suspect that that has a little to do with how Pärt's work came to my attention - it was first recommended to me because I liked Slowdive and a friend thought that it shared a sensibility with that group's music. I could see why they'd linked the two.  My half-baked, unscientific theory on all this is that at some developmental stage when I was particularly open to suggestion/influence my brain was altered, connections were made and synapses fired on hearing the chime of The Byrds'  Rickenbackers (my dad bought me "History of The Byrds" on cassette in the early 80s) or the glorious, chaotic squeal of The Jesus and Mary Chain's feedback and was changed for good.  So, until a piece of classical music alters my brain and makes my heart beat faster, give me three chords...


(This post is called 'Dumb' because it was supposed to follow 'Numb' but life got in the way....)
Posted by brogues at 21:52 No comments:

Ric Menck's lovably wimpy singing on Choo Choo Train's sparkling "Wishing On A Star" has long been one of the yardsticks against which I measure other vocal performances.  That it was recorded as an antidote to the 'smelly guy rock' that was prevalent around Illinois in 1987 only makes me love it all the more.  A similar vocal which measures up well on this scale is John Murphy's on Shoes' "Okay" from roughly a decade earlier:


"Okay" was the b-side of Shoes' debut single, "Tomorrow Night" (BOMP!) but only recently came to my attention as it also appears on the brilliant "Black Vinyl Shoes" lp, reissued in late 2012 by the always classy Numero Group.  Despite the recent gulp-inducing hike in the international postage rates charged by the US Postal Service, I still felt the need to snap up an unplayed copy of "Tomorrow Night" from a Stateside seller.  Concerns about the money spent, however, melt away in the face of such a beautiful piece of art.

According to Shoes' Wikipedia page, Ric Menck has drummed for them in the past.  I'll bet that was a dream fulfilled for him!

Other vocals which score highly on the "Wishing On A Star" scale: