What were you doing the night Princess Diana died?  Me, I was on a transatlantic phonecall to Andrew Prinz of the ridiculously good Michigan group Mahogany.  We were supposed to be doing a little interview for the Glasgow-based cut'n'paste fanzine Boa but ended up talking for hours about the breaking news.  Those were the days before 24 hour terrestrial TV news in the UK so I was following it on Teletext.  Andrew, of course, could follow proceedings on CNN.  I hadn't thought about that night for years until an excerpt from the (giddy, breathless) interview showed up on a Japanese blog of all places.  If I remember correctly, we didn't get the interview done so I had to phone back the next night which contributed to the single biggest quarterly phone-bill my folks had ever seen.  Ouch!

Wind on 15 years and there's a far less giddy and breathless (guess I just got old!) Not Unloved piece in the 2nd issue of Great Shakes! zine.  Great Shakes! is the handiwork of Calvin Halliday, drummer from Water Wolves, Glasgow's brilliant response to the whole Captured Tracks/Hozac axis of garage jangle.
,

Not Unloved's contribution is a paragraph or two on Falkirk, Scotland's almost entirely overlooked/forgotten This Scarlet Train:
The easiest way to get a copy is probably to email Calvin. I've yet to see inside a copy but the cover looks smashing. Big thanks to Calvin for giving me the opportunity to give some belated recognition to a group who made one great record a quarter of a century ago and then disappeared.
Posted by brogues at 01:07 No comments:

Certain records need to be heard at the right volume to really shine.  For instance, Feel Right's "North West" (Icecapades) probably has to be heard at skull/resistance crushing volume to fully reveal its brilliance.  Luckily, that was the volume at which I first heard it (thanks G!) so I fell for its charms immediately.  There's something glorious about hearing a couple of kids throwing themselves headlong into their songs.  Hanging around is for losers!  Feel Right is one of the few British* groups I've come across who can hold their own with the Hozac/In The Red groups in terms of prime clatter and you can hear in their approach to recording an affection for the Guided By Voices/early Sebadoh school of lo-fi melodic pop meets metal bin lid battery.  According to the hand-numbering on my lp only 100 copies of the vinyl have been pressed so if your ears need a rub down with this particular scouring pad, best not dilly dally.  As the group says on 'Show Him', TURN IT UP!


* - They're from Manchester and consist of a member of the equally marvellous Former Bullies and the new to Not Unloved Waiters.
Posted by brogues at 22:43 No comments:

Islington's Union Chapel proved to be the perfect venue for Birdie's return to performing live with a swish new sound system and a sensitive soundman teaming up to produce a fittingly gentle, detailed sound that, thankfully, didn't rattle around in the old church.  Playing as a 3 piece - Debsey on bass and vocals, Paul on guitar (including some devastatingly pretty 12-string) and Jon on drums - they worked their way from 'Port Sunlight' , the b-side to their classic first single, to the tear duct teasing 'Sidewalk' in around 20 or so minutes.  Was it worth the 4 and a half hour train ride?  You bet it was!  Without doubt Debsey's voice is one of the most beautiful and affecting I've had the pleasure to hear.  At one point it cracked just a little which prompted her, mid-song, to say, "Sorry for my voice".  Now, if ever a singer did not need to apologise for their voice it's Debsey!  A combination of the lunchtime daylight streaming through the stained glass windows and being sat in the second row of pews afforded me the chance to catch all the little looks and smiles shared between the group.  The look on Debsey's face when she realised that she'd said a naughty word beginning with F in the House of The Lord was priceless.  Afterwards J said that some of what they had played reminded her a little of Luna.  It was an astute observation as without the keyboards and trumpets of the records it shared the hushed, simple elegance of that group's 'Bewitched' set.  Big thanks to the team behind The Hangover Lounge for making such a special thing happen.

Here's some footage shot by my friend @stringbeanjen who was sat immediately to my right.  We were pretty close to the PA so there's a little woolliness to the guitar but it captures more than a little of the loveliness of Debsey's vocals:


(...if life doesn't intervene to prevent it, I'll post some thoughts on the rest of the Lost Weekend in due course)
Posted by brogues at 23:22 2 comments:

Musical diversity be damned!  The third in Not Unloved's triptych of recently released fuzz-muddied guitar pop tunes comes courtesy of Elefant Records' Los Bonsais.  If their single "Ultramarinos" is any guide, these Spaniards are a little less giddy and maybe add a little less sugar to their cooking than The Garlands and Obedient Wives Club.  There's a pleasing base hum to "Ultramarinos" and it earns considerable plus points for repeating the least pretentious, least ostentatious guitar solo imaginable.  Again, it may not be novel but it'll slake my thirst for fuzz for a wee while at least.  I don't think I've enjoyed a record of Spanish origin this much since Aias's lp for Captured Tracks.
Posted by brogues at 21:34 No comments:

It's easy to be critical.  It's easy to bandy about words like 'derivative' or 'formulaic' and dismissively list all the groups who got there first when writing about new records by new groups.  It's just as easy and much more fun, however, to relax and just let the music be thrilling and pretty.  Singapore's Obedient Wives Club may be the latest in a long line of kids with Spector's Back To Mono box and a Shop Assistants by way of Black Tambourine fixation but their 4 track cd-r on Happy Teardrop is so dosed-up with fuzz, reverb and YinQi Lee's gorgeous vocals that it scarcely matters that they aren't in the business of innovation at this point in their development.  "This Is It" is the track which caught my ear first and which I've played the most but, really, I've enjoyed all 4 tracks.  The 3.5" cd-r + download is available from Soft Power Vinyl and the songs can be downloaded from the group's bandcamp page.  Best be quick if you want the cd-r, though, as there are only 80 copies!


Obedient Wives Club - This Is It by happyteardropmusic
Posted by brogues at 21:04 No comments: 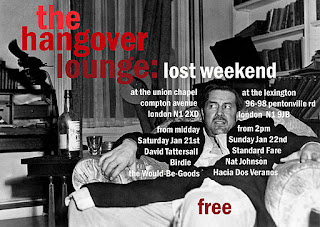 Not Unloved is up to high doh with the news that Debsey Wykes and Paul Kelly's soft as snow group Birdie is playing live for only the second time in a decade and at London's pretty Union Chapel, too.  The time couldn't be more right for Birdie to return to the stage what with Paul's documentaries on Debsey's group Dolly Mixture and Lawrence Hayward from Felt finally hitting the big screens to richly deserved acclaim.  We have the smart kids behind The Hangover Lounge to thank for making this happen.  If you remember, a gorgeous Birdie song graced their second e.p. released last Record Store Day.  Anyone in the same hemisphere is urged to be there.  It's free, for goodness sake!

(I once bought a 15 7" bundle on ebay just to get "Spiral Staircase". It didn't even have the sleeve!)
Birdie take to the stage at 12:50 on Saturday, 21st January but before that Matinee's lovely Would-be-goods will be bringing their literate, pin-striped rebel songs to the Union Chapel. Best get there early, then!
'
(They may even play this if this video from a couple of years ago is any guide!)
Posted by brogues at 22:27 3 comments:

The Garlands "You Never Notice Me" b/w "Continue"

Today definitely had a pink tinge to it. First, the sky painted itself a breathtaking shade of pinkish purple then a record on Big Pink Cake Records won itself a sizeable place in my heart.  Given a love of fuzzed-up girl-pop, The Garlands' "You Never Notice Me" was always going to find a happy home in my record box.  "Continue" on the flip, however, makes it even more lovable.  It goes on the sweetest rampage, all frenetic playing and snappy melody but with the most cooing backing vocals.  Those backing vocals are so gentle; worthy of Laura Watling, even,  It's the kind of song you want to play real loud so that it wraps itself around you as you spin in your living room.  It's bigger sounding than you might expect, too. A wee bit of ambition and a little self-confidence is a good thing.  Brilliant single!