Wyld Gooms "Doesn't Matter To Me"

It may only be March but there's a fair chance that LA's Wyld Gooms have already produced thee garage b-side of 2022 in "Doesn't Matter To Me" (Outro Records):
The various Gooms have done time in a bunch of notable Not Unloved-endorsed groups (including but not limited to The Premonitions, The Slop, The Violet Mindfield, The Night Times) so it's no surprise that they know their way around a coulda-bin-comped-on-Pebbles tune and can deliver it with enough verve to elevate it well above the pack. The ole roar then guitar solo one-two about a minute and 45 seconds in, in particular, is a real adrenaline rush. It should be noted that the a-side is a blast, too; 2 minutes and 17 seconds of prime organ-addled scuzz to set yr bowl cut shakin'.
Posted by brogues at 22:20 No comments:

Scott McCarl and The Rubinoos "In Love Without A Girl"

A few years ago one of the most played slabs of vinyl around these parts was a late 60s 45 by Yellow Hair. "Sometimes" is a sun-bleached number that wafts on a West Coast breeze of gentle harmonies and unobtrusive instrumentation. It was later compiled by Numero Group on the indispensable "Louis Wayne Moody High" compilation:
"Sometimes" was written by a chap called Scott McCarl. In the late 90s McCarl, backed by California's legendary Rubinoos, cut one of the finest power pop singles since the genre's skinny tied 70s hey day with "In Love Without A Girl". It was released on the Titan label which was the subject of a typically comprehensive boxset via the aforementioned Numero Group. "In Love Without A Girl" is a chunky pop number with lovelorn lyrics and a terrific vocal from McCarl that should have admirers of The Posies circa "Frosting On The Beater" excitedly updating their wants lists. It sounds thrilling when cranked up loud.
Posted by brogues at 20:25 No comments:

Belgian label Lexi Disques won a little piece of Not Unloved's heart last year with the release of Lawrence Le Doux and Roger 3000's huggable "Creme/Caramel" single and they've repeated the trick in 2022 with Charlène Darling's bare bones but incredibly catchy "NON MON GARÇON" 7". From just whip-crack drums and a plaintive, at times double-tracked, vocal, Darling has conjured up a memorable slice of melodic Stereo Total-style pop that takes up residence in your brain with the result that you'll catch yourself unwittingly tapping out its rhythm and humming its melody as you go about your daily chores. Darling released an album in October 2019. It's high time Not Unloved became acquainted with it! 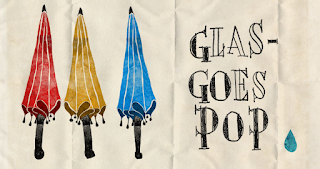 It's been a wee while since Glasgow had a dedicated indiepop shindig. Probably the last one was the Pop South Weekender at The Glad Cafe in, ooh, 2016 (?). Creation Records royalty, Pete Astor, played that one - he was every bit as tremendous as I'd hoped; check the footage here - and he's also in the smashing-looking lineup for Glas-Goes Pop this coming August. The acts announced so far are:

From what I hear, a couple more acts will probably be added to this already stuffed list. There's so much to look forward to but one name that leaps out is that of Rachel Love. She won a lot of hearts as a member of Dolly Mixture back in the early 80s but her full length from last year, "Picture In Mind", was among the very best albums of 2021 for Not Unloved's money. It'll be a real treat to see her perform songs from it live, that's for sure.

It'll be a blast, too, to see David from Comet Gain in Glasgow once again. It's been way too long since Comet Gain played a rollicking set as part of an all-dayer at Mono and even longer since they tore up the basement of The 13th Note with the incredible The Peechees - what a memorable night that was! It's also going to be tremendous to welcome Jetstream Pony to a Glasgow stage for the first time. Not Unloved made the pilgrimage to London's legendary 100 Club to see them play with the always brilliant The Orchids and the soaring St. Christopher in February 2020. That seems like forever ago now so roll on August!
The scoop:

Also, be sure to tune in to Clyde Built Radio on Saturday, 19/03/2022 at 11am (UK time) to hear the organizers talk about the event! Don't worry if you can't tune in at that time as it'll be archived here in due course.