Any show with the combined brutal talents of Anxiety, Kaspar Hauser and Hard Left is a Saturday night show if ever I saw one.  Despite being on a Sunday night, all three groups whipped up a storm

and amply rewarded the hardy souls who were in attendance.  Unfortunately, I dropped my pen into the dark recesses of The 13th Note so was unable to write down what I played but what made it from my little 7" box to the decks was as follows but I can't vouch for the order being accurate:

Fatal Microbes Violence Grows
The Nightingales Paraffin Brain
Bush Tetras Too Many Creeps
Tesco Bombers Hernando's Hideaway
The World It Takes 2
The Mekons Where Were You?
Buzzcocks Love You More
The Quads There Must Be Thousands
Wild Billy Childish and The MBEs Thatcher's Children
The Avengers We Are The One
Royal Trux Waterpark
The Muffs Big Mouth
The Zeros Main Street Brat
Lungleg Maid To Minx
Primetime Pervert
Momus Hairstyle of the Devil
CC Dust New Ways
Molly Nilsson Ugly Girl
Crash Bright Colored Lights (in honour of Mike from Hard Left's old group)
The Rain Parade You Are My Friend
Memphis You Supply The Roses

A big thank you to David from Ski Pie Rage for telling me about that Quads 7" a couple of years back.  It's a real topper and, for once, doesn't cost a fortune on discogs! 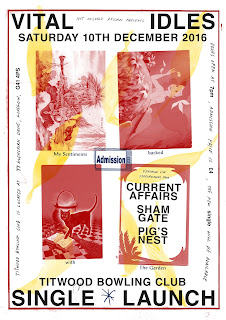 Joining Vital Idles will be:

Current Affairs: Strident, utterly compelling post-punk from the dark side whose members can also be seen tearing it up in Shopping, Anxiety and Kaspar Hauser.

Pig's Nest: Talked about in hushed tones, these cats are rarely seen live. Musho and David are 40% of the mighty Mordwaffe, the other 60% being 75% of Vital Idles.  Yeah!
Posted by brogues at 22:45 No comments: 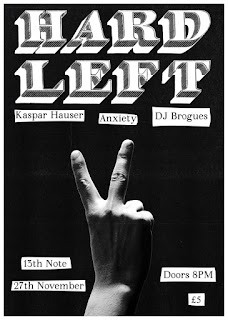 Glaswegians!  There's a rare chance to witness Hard Left's oppositional '77 punk barrage downstairs in The 13th Note a week on Sunday.  Come along and pay your respects to Mike Schulman and Stewart Anderson and thank them profusely for all those incredible Slumberland Records and 555 Recordings/Emotional Response releases that have illuminated the last quarter century.  Two of Glasgow's most abrasive and exhilarating groups will be sharing the bill with them: Kaspar Hauser and Anxiety.  Between the mayhem, I'll be playing some records and endeavouring not to kill the vibe.  It'll be ferocious but that seems like a suitable response to how 2016 has panned out.


There are Facebook events for the Glasgow gig as well as the Demand The Impossible tour. 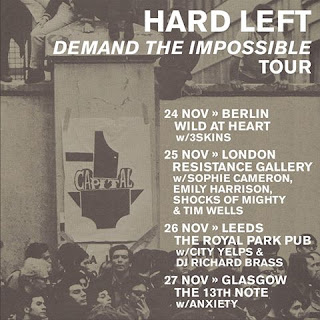 Paul Messis's Market Square Recordings has, for Not Unloved's money, released some of the most consistently enjoyable singles of recent years.  Its latest missive is a fantastic four-tracker of prickly, but adorable when you get to know it, post-punk by Brighton's The Sticks.  It's good to have The Sticks back on vinyl. I'd assumed them defunct as a few years have passed since I bought their M'Lady's Records single and their name hasn't cropped up all too much since.  Any of the tracks on "No Sustain e.p." would hold its own among the myriad astute picks on Dynamite Hemorrhage or Futures and Pasts playlists.  Those with a fondness for The Fire Engines, The Pheromoans and groups of that ilk should enjoy pulling awkward Anglepoise lamp-style shapes to The Sticks.  MSR 14 is released in an edition of only 300 so swift purchasing action is in order!