Best Of 2015 lists for Monorail Music

This year while deciding what should go in my top 10 albums list  (and top 5 reissues and top 3 singles) for Monorail Music's annual poll, I felt like a football manager who doesn't know his best eleven.  So many records could have and should have been on the list and I have guilt in my heart that they aren't.  Some I purchased too late to make the cut, such as the ridiculously pretty Vic Mars "The Land and the Garden" lp (Clay Pipe) or Heather Leigh Murray's unique and eviscerating "I Abused Animal" (Editions Mego).  Based on repeated plays alone, Four Tet's euphoric "Morning/Evening" (Text) would probably have made off with the first place garland.  Why it doesn't appear below is a mystery!  Michael Kasparis's Night School Records had an extremely strong year releasing ace material by the likes of Paper Dollhouse, Apostille, Liberez and Molly Nilsson.  Any one of them would've made a worthy addition to my top 10.  Oh, and Night School's reissue of Rose McDowall's "Cut With The Cake Knife" deserved a spot on my top reissues list.

N.B. All titles link to a song from the record. 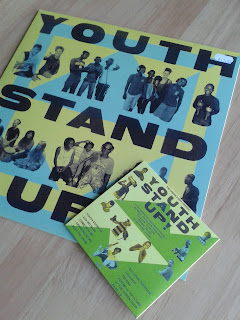 Try as I might, I couldn't limit myself to 3 singles - there were just too many belters released in 2015 for that to happen!  I saved Spinning Coin's "Albany" for next year when the Geographic 7" is released despite the fact that it graced a cassette single in 2015.  Oh, and the Expert Alterations 12" on the mighty Slumberland Records would definitely have been on this list had I not been too stingy to pay the postage from the US.  Sorry, Mike!

I suspect that when I finally have Gloria Ann Taylor's "Love Is A Hurting Thing" in my hands I'll have a rethink and Golden Teacher's compilation of their first three e.p.s appeared in the racks too late to qualify.
Posted by brogues at 15:26 No comments: