Turn your living space into a tangled mess of limbs and sweat with the three best tunes I've heard for getting on the good foot to in the last week or two:

Last Friday saw the launch party at The Art School for The Green Door Studio's crucial "Youth Stand Up!" lp (Autonomous Africa - read the story behind it here).  The names Sacred Paws and Golden Teacher on the bill ensured that all 300 tickets were sold and it was great to see the Vic Bar's black and white tiled floor rammed with increasingly frenetic dancers for "Come With Me" .  With its insistent rhythm, fabulously dense arrangement and pleading vocal, had it played on a loop for the rest of the evening I wouldn't have complained.  Totally wondrous!

DJing before the recent John McEntire/Schneider Kacirek show at Mono, Eilidh Rodgers from aforementioned Sacred Paws stopped me in my tracks with the incredible "Djama" from Idrissa Soumaoro's "Ampsa" (recently reissued on Mississippi).  Shamefully, I know nothing about Malian music of any era but I do know that "Djama" is something special.  That organ at the start could've been lifted from any number of Teenage Shutdown downer garage tracks.  A stunning track.

The Green Door Studio's (not to mention Whilst's and The Rosy Crucifixion's!) own Stuart Evans weighs in with some of the crispest, most beautifully recorded percussion on "Dub Cha Cha" from his recent  "In A Year of 13 Moons" 12" (Invisible, inc) under the name Sordid Sound System.  Dig that sawing Suicide keyboard sound while you're playing air cowbell!

Och, while I'm banging on about dancefloor killers, The Mole's "Lockdown Party (DJ Sprinkles Crossfaderama) (Perlon) remains one of the most infectious good time records I've bought in 2015 (thanks to the mighty Jon Dale for the tip!).  It hasn't once failed to put a smile on my face or get my feet on the move.

Starting as sparsely as Weekend's matchless "Drumbeat For Baby" demo before building emotionally, Tropic of Cancer's "Stop Suffering" (like the aforementioned Weekend demo available through Blackest Ever Black) is as sober as anything I've bought in months.  Don't get me wrong, it's not dour or melodramatically gothic, it's just serious and all the more lovely for it.  Perfect listening for watching the rain streak down the windows on a Sunday night in November.  If I get round to compiling a list of Not Unloved's favourite singles of 2015, "Stop Suffering" will be on it.

Email ThisBlogThis!Share to TwitterShare to FacebookShare to Pinterest
Labels: Blackest Ever Black, Music, Tropic of Cancer

(Walking down Essex Road, London towards Islington Assembly Hall to see The Clientele a few weeks ago)

I could tell J didn't believe me.  She was right not to.  About halfway through, the group was joined by their string arranger, Louis Phillippe, who read Alasdair MacLean's wonderfully evocative short story, 'Losing Haringey'; a song which has never failed to make me shiver since the first time I played 'Strange Geometry'.  Philippe then took his place at the grand piano and from the moment Alasdair sang "Goodnight my angel of the dark" the shivers gave way to tears.  I just hadn't steeled myself for  'Dreams of Leaving':


After that they went straight into 'Summer Trail' from their fabulous Hangover Lounge split with Birdie.  It was majestic but didn't aid in my vain attempts to regain some sort of composure.  In retrospect, it's just as well they didn't then play '6 a.m. Morningside' or 'Never Anyone But You' .  I have too much history layered on top of those songs to be just a casual listener.  Even the guy to my right who picked his nose (and ate his pickings) for the first 20 minutes or the irritating couple (what kind of selfish dud wears a massive hat with a 4 inch brim on the back of their head at a concert?) who snogged and shouted for songs but didn't applaud the group once and who stood in front of me the very second the group took to the stage couldn't take the shine off a beautiful evening.  Any show that ends with the purchase of a new mug is one to savour, for sure. 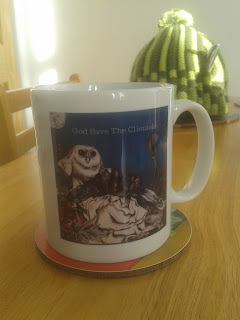 Calling all fans of the musical output of Glasgow! 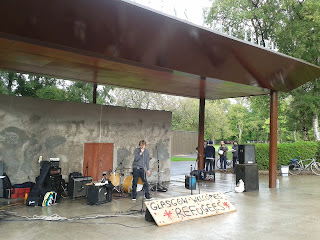 A few weeks ago I spent a few enjoyable hours in The Glad Cafe in the company of Laurence Estanove, a French researcher in English and Social Sciences at Paris-Descartes University.  She is currently conducting some fascinating research that should be of interest to readers of Not Unloved:

"My objective is to look at the way people perceive Glasgow, at what image or representations of the city they may have (whether they've actually been to Glasgow or not) through following its independent music scene since the early 1980s.

Please note that your answers will be used exclusively for research purposes and entirely anonymised."

To be part of it all you have to do is fill in the questionnaire here.  Go on, be part of something academic and cool!
Posted by brogues at 22:02 No comments:

Monorail Music's inaugural A Weekend Abroad festival at the CCA was a complete blast.  Unfortunately, due to prior pop commitments (more on this later), I wasn't able to witness Night School Records' evening of interplanetary oddness, wryly observational synth pop and dreamy dance float but I did get to enjoy The Pastels and friends bring warmth and good humour and ENERGY to the sometimes sterile main performance space.  Normal Love's debut showcased hit after hit with Roxanne and Eilidh's voices combining to moving effect.  One song, I'm guessing called "Angela", was supernaturally beautiful.  Recordings must follow! Next up were Spinning Coin who rampaged through their set with conviction and heart.  They never sounded better.  Debsey Wykes and Paul Kelly's Birdie were as endearingly funny and melodically rich as I could have wished, the tinge of melancholy in Debsey's voice making it the perfect autumn sound.  The Pastels closed the evening with yet another reminder that when they're on it and their subtleties can be heard, few can match them.  What a night!

To mark the occasion some friends (see below for more from them) and I produced a little fanzine.  J and I assembled 105 in all in an assortment of autumn leaves colours.  As an altruistic gesture, we gave them away for free.  All the physical fanzines are now gone but there's a digital copy here for those that missed out. 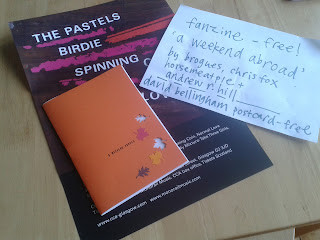 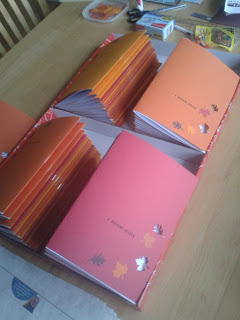 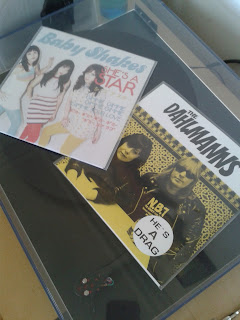 Not many groups are as effervescent or as multi-coloured as Shonen Knife.  Baby Shakes, however, are one of the few.  Their recent "She's A Star" (Surfin' Ki) single is wholesome cartoon glam stomp of the highest order. It really ought to have come with a Hanna Barbera animated video.  7 years ago (zoinks!) a post on the precursor to Did Not Chart had me scrabbling about trying to find a UK distributor able to sort me out with a copy of their first lp.  This autumn I had to look to mainland Europe (thanks soundflat.de!) to snag a copy of their second lp, "Starry Eyes" (Lil' Chewy).  On first listen it's slightly chunkier sonically but still has the tunes to prompt spontaneous outbursts of kitchen dancing which has proved useful for keeping the late autumn chills at bay!

The first thing I noticed when the latest 7" by The Dahlmanns (Ghost Highway) arrived was the Next Big Thing t-shirt.  Any group with the smarts to advertise their love of Lindsay Hutton's seminal N.B.T. fanzine is alright by me!  It's a classic tale of a dud boyfriend set to an insanely catchy  Rock'n'Roll High School tune that's had me repeating "Yeah, yeah, he's no fun!"  till I needed a slap for a few days now.  "He's A Drag" was written by Kurt Baker.  He sure sounds lie a chap who knows how to wrangle a pop melody into shape.  And so another avenue of YouTube investigation (and, possibly, wallet emptying) opens up...

I'll be giving these 7"s a fair few spins over the coming week to get my dose of top drawer contemporary power pop as, unfortunately, I'll be missing Mary Timony's Ex Hex who roll into Glasgow for a show at Stereo on Friday night that's sure to be a riot of glitter, harmony and riffs.
Posted by brogues at 17:56 No comments: