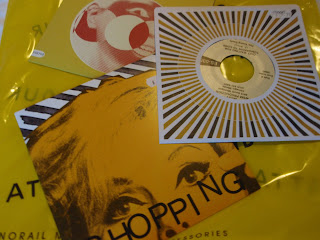 Imagine being the soul loving Numero Group employee who happened upon the The Young Souls' "Quit Waiting For Tomorrow To Come" and "Puppet On A String" lurking on tapes from a dusty box marked 'unreleased'.  Their heart must've been thumping like a Tour de France cyclist's midway through a mountain stage climb!  Both songs are sung so elegantly and their arrangements so classy and uncluttered that I'll be endlessly flipping the 7" on which they now appear in a vain attempt to figure out which one I love more.

Over the last few years I've become seriously enamoured with the guitar playing of Rachel Aggs.  With Sacred Paws and before that with Trash Kit (amongst others!), she's carved a series of guitar lines into my memory and prompted many an awkward dance move.  Her latest group, SHOPPING, is set to do likewise with both sides of their recent 7" for Milk Records benefiting from particularly incisive, dancefloor-honed examples of her craft.  Roll back the carpet and jerk it out like yr at some Thatcher-era youth club disco and the awkward kid by the stereo just sullenly slammed in his new Bush Tetras cassette!

When Ghost Box finally started releasing 7" vinyl via their Study Series I was delighted and jumped on the first few.  Somehow, though, after maybe 4 or 5 releases, they quietly stopped finding their way into my record bags.  There was no real reason for this.  The quality didn't drop noticeably and they continued to look great thanks to Julian House's consistently brilliant graphic designs.  With the release of the ninth volume - Listening Center's "Titoli" - I'm happy to be  back in the Study Series fold once more.  Comparisons with Birmingham's slightly overlooked but sorely missed Plone are accurate.  There's a similar sense of wonder spiked with just a little melancholy to that group's bakelite mini-symphonies.  It's ideal music for this half-summer, really.  Time now to look back and see what I missed when my ears were turned elsewhere, I think.