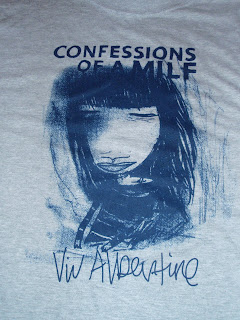 Mono has been the venue for some of the most unique, memorable and soul stirring shows I've been lucky enough to witness in 21 years of gig going.  When it's heaving and Glasgow is up for it, you wouldn't want to be anywhere else on earth.  When, for whatever reasons, Glasgow doesn't show up and the lights cruelly illuminate what seems like acres of wooden floor it can be a sobering place.  Unfortunately, for former Slits guitarist Viv Albertine's show last there last night, the latter was the case.  For the first 2 acts, Tragic O'Hara and Lach, there was nobody on the floor in front of the stage.  It must have been demoralising for both promoters and performers.  To their credit, though, both met the situation with undimmed vigour. New Yorker Lach was particularly funny, going on a hilarious rant against Tom Petty and the charmed life documented in his biography.  He also played his song about Kiss twice.  Helpfully providing audio footnotes for those of us too dumb to know who Paul Stanley was on the second run-through.

Local cave-dwellers Aggi Doom were brilliant and for their brief set there were 6 feet on the floor in front of the stage, 2 of them mine.  If my eyes can be trusted, they count former Divorce guitarist Hilary Van Scoy and former The Royal We violinist Joan Sweeney (now on bass) among their number (4).  Primal beats, a reigned-in but (ton)sure-footed cover of The Monks and a witchy lead singer called Claudia Nova (great Bond girl name!) who shares a Dum Dum Girl's love of black eyeliner and hosiery adds up to a fine 15 minutes in my book.

Viv blew into Mono like a sparkly, bossy (her word) tornado. She arranged chairs in front of the stage and corralled the small crowd into something approaching a critical mass.  One thing you learn about Viv Albertine pretty early on is that she doesn't believe in romantic love any more.  You learn that and then you are reminded of it via songs like "Couples Are Creepy" (not 'cuddles' as an audience member in Edinburgh had thought the night before!) and her between song banter.  She's direct, confessional, not shy of the saucy stuff (check the slogan on the t-shirt*, above), most probably a handful but also sparky, creative and rightfully proud of her legacy.  The songs from last year's "Flesh" e.p. (Ecstatic Peace!) were rawer than on the cd - it was just Viv and her Telecaster, after all - but no less compelling.  She seemed to be having a great time and I for one can say that I was, too.  I just feel a bit guilty that I didn't do my bit to tell the world that she was playing.  If there's a next time, I will.


(I would've embedded this video but embedding has been disabled.)
* - If you dig the image on the shirt, check out more of designer Daniel Novakovic's ace illustrations here
La Terrasse confirms that Viv's Dundee show was simlarly great!
Posted by brogues at 23:27