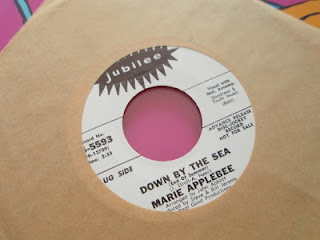 To my mind Jubliee released at least 2 of the greatest pop singles ever and both were by Marie Applebee.  Ever since I bought "Here Come The Girls Volume 7: The Trouble With Boys"  from the record department of John Smith's bookshop in the mid-90s, my favourite song from the girl-group era has been Applebee's sorrowful "Down By The Sea (End of Summer)".  Marie's voice is simply incredible.  At times as intimate and soft as any I've heard while at others as emotion saturated as the most melodramatic of West End musical stars'.  The music, too, shows similar contrasts from the restrained, mournful intro to the tear-stained strings and broken-hearted bells of the chorus.  I've seldom heard a melody fit a tune better and there aren't too many songs which capture the regret at romance gone wrong better than these:

In every sense, "Down By The Sea (End of Summer)" is a POP masterpiece and I'd say as good as anything produced by Phil Spector or any of the other more highly revered production teams of that era. 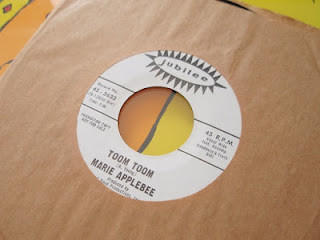 The other wondrous Marie Applebee single is much less dramatic, much less orchestrated but just as brilliant.  "Toom Toom (Is a Little Boy)" is a stripped-back slice of proto-K Records naivety that again showcases Marie's utterly beautiful voice to full effect.  It, too, is on Sequel Records' "The Trouble With Boys" cd but DJ copies of the original 7" can be picked up fairly cheaply (which just goes to show that in the ebay world there's not always a correlation between the quality of a record and the price it commands!).  To the best of my knowledge Marie only made one other single: a bouncy version of the song "Dear Mrs Applebee" which was made famous in the UK by David Garrick.  It's good and worth owning (it doesn't cost much - I got mine for a £1.50 a few years back) but it's not in same league as the other two.  It's funny.  I have multiple albums by some bands but wouldn't necessarily describe them as favourite groups and I only have three 45s by Marie Applebee but she's unquestionably one of my favourite artists ever.
Posted by brogues at 11:41