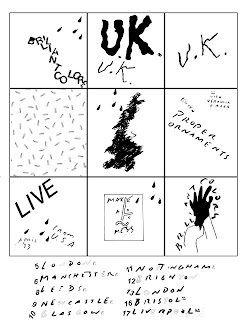 Slumberland Records' punky messtheticists Brilliant Colors strike me as a little unlucky.  They last played in Glasgow at The 13th Note on the same night as the celebration of Alex Chilton's life just across the road at Mono. Alex Chilton was much loved in Glasgow so a lot of those who might have taken a chance on Brilliant Colors probably opted for Mono instead.  A few people - Not Unloved included - dashed between the venues between the groups in an attempt to see as much as possible of both shows.  It was a memorable night!  Next Wednesday's (April, 10th) Brilliant Colors show at The Old Hairdressers has been abysmally promoted.  Crazily, it's not even listed on the What's On page of the venue's website and the group's name has been misspelled on the poster; 'colours' rather than 'colors' prompting concerns that a UK Brilliant Colors tribute act is playing rather than the real deal!  I really hope this time that The Old Hairdressers is rammed as the bill is strong with both Glasgow's brooding, post-Babes In Toyland screamers Palms and James from Veronica Falls' lovely 60s pop by way of 80s Dunedin group, The Proper Ornaments, also appearing.


(Thanks to S for pointing out the typo in the subject line. Misspelling 'Glasgow' in a post where I have a go at somebody else for wrongly spelling a group's name just goes to show what a dumpling I am.  I need an editor!)

Update: There's now a Facebook page for the event here
Posted by brogues at 10:44