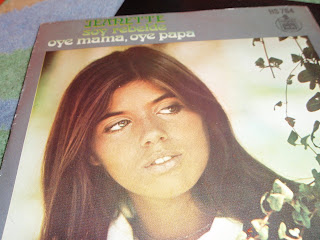 Once, I saw Jonathan Richman referred to in an article as "the quietest punk". On the basis of her 1971 hit "Soy Rebelde" (I'm A Rebel), Jeanette could just be the quietest rebel:


Just look at the sincerity in her eyes! In a head crowded with all manner of noisy music, "Soy Rebelde" somehow manages to nudge its way to the front and has thus provided the soundtrack to many a trudge through the rain-sodden streets of Glasgow. I guess it's the child-like (if Wikipedia is correct, she was around 20 at the time) purity of Jeanette's voice and the simplicity of the melody that make it the ideal earworm. I'm glad she recorded it in 1971 when there was much less over-singing in mainstream pop music. It wouldn't have been half as adorable with all the barnacles that encrust so many of the vocals on the songs I turn off the radio nowadays.
Posted by brogues at 18:07