Girls Names "Dead To Me" 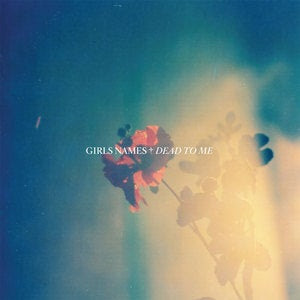 My chemistry teacher once told me that "Procrastination is the thief of time".  20 years on and it would appear that diddling on the internet has replaced procrastination as the thief of my time.  That pesky internet has stolen so much time of late that a shameful number of records and cds have been suffocating in their shrinkwrap instead of breathing on my hi-fi.  One such cd was Girls Names' debut.  After their rollicking set at Commercial Alternative last year, I was hotly anticipating the release of "Dead To Me" (Slumberland Records / Tough Love) so it's a bit odd that it suffered such a fate.  Anyway, it finally got a few spins last night while I was reading The Observer from 2 Sundays ago which I didn't read at the time because I was diddl...er...you get the picture.  Girls Names' earlier eps and their ace split with Brilliant Colors suggested that a full length would sound like this and it's a relief that it actually does.  Which is to say that I'm glad that, unlike some of their peers, they didn't feel the need to get too polished too soon.  Most tracks sound like they were made by a gang of kids sent wild on hearing Crystal Stilts, Joy Division and the grumbling, rumbling music of the Estrus Records / Dick Dale axis of surf (as opposed to the harmony spangled surf of The Beach Boys and Jan and Dean).  So, a record to nourish those with a love of the sparkier side of guitar pop.  It's at its sparkiest on songs like "I Lose"  (previously aired on the aforementioned Brilliant Colors split) on which the guitar rattles like the chrome fittings on an aged school bus battering along a pothole riddled road circa 1975.  At last Friday's Ducktails show D suggested that it sounded as if I loved just about every record out at the moment.  Of course that's not true.  What is true is that recently there have been a number of records such as the aforementioned Crystal Stilts' latest, Amor de Dias's debut, the new Comet Gain record,  etc. that haven't disappointed so I feel compelled to evangelise (ok, chunter on at length to anyone who'll listen!) about them.