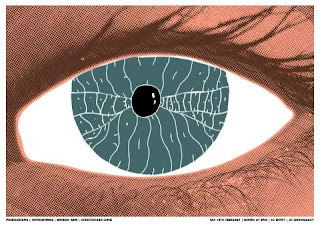 Being a member of The Pheromoans is not without its hazards.  Last night at Nice'n'Sleazy at least a couple of the six were shaking off the effects of their frenetic playing after each song - Repetitive Strain Injury is a real risk if you're a Pheromoan!  Their set in support of Tyvek at The Captain's Rest was one of the live highlights of 2011 for me so they had a lot to live up to this time.   Despite not now having the element of surprise, they didn't come close to disappointing.  Their at times rickety, at times rollicking D.I.Y. pop may takes its cues fairly directly from the dishevelled pop poetry of The Fall and the flaky paint artiness of The Nightingales but you have to admire them for determinedly taking the more awkward road.  I don't remember them having violin or keyboard last year - I'm certainly not renowned for being the most observant! - but their sound really benefited from them.  I wish I could remember just a few of the cool snatches of lyrics that flew by.  Maybe I'll take a notebook next time.  According to RjW, their self-deprecating lead singer, in Leeds on Friday night they sold precisely no records.  I can only assume that that was because all the astute kids in the audience had already devoured them. I bought two 7"s and an lp and can't wait to get familiar with them which is the least I can do after The Pheromoans braved musculoskeletal disorders to produce them.

Email ThisBlogThis!Share to TwitterShare to FacebookShare to Pinterest
Labels: Music, Nice'n'Sleazy, The Pheromoans